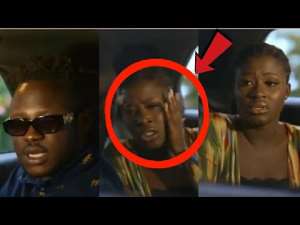 Fella Makafui has released the trailer of her first movie produced under her own production, Fella Makafui Productions and to the surprise of many, it features her boyfriend, Medikal

In the movie trailer, Medikal and Fella got entangled in relationship issues and were sorting it out only to turn out Medikal was also cheating on Fella.

Fella in an attempt to snatch Medikal’s phone from him to see who’s calling got the slap of her life.

The movie titled ‘FRIES’ was directed by Kyei Baffour and produced by Fella Makafui.