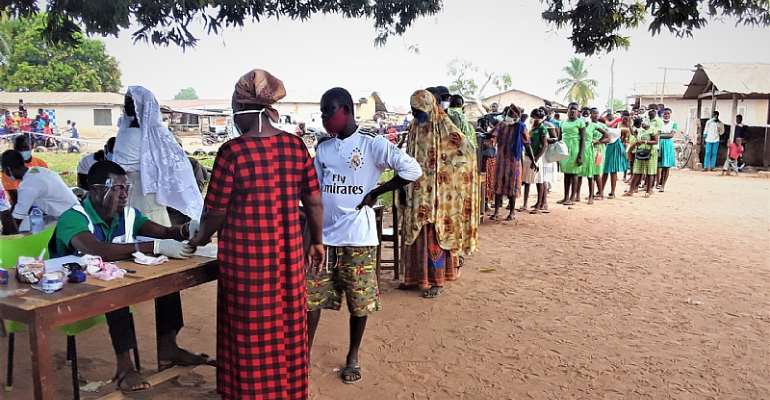 Voters waiting patiently for their turn at New Kokrompe
2020 Election HQThe ongoing Presidential and Parliamentary elections are progressing smoothly in the Atebubu-Amantin Constituency of the Bono East region.

As at 11.00am this morning when this report was filed no major problems have been encountered at any of the 10 polling stations visited.

At 8.24am when the ISD visited the Zongo Nursery A center in Atebubu 48 out of a total of 541 expected voters had cast their votes.

At the Anglican primary school B also in Atebubu, 89 out of a total roll of 374 had cast their votes as at 9.05am.

Mr. Sylvester Kojo Antwi, the Presiding Officer at the Atebubu Anglican JHS told this reporter that 94 out of the expected 586 had cast their ballots as at 9.14 am.

At Saint Martins Primary School in Atebubu 102 out of the expected 300 voters had cast their ballots as at 9.30 am.

The New Kokrompe SDA church B polling station had recorded 116 voters out of a total of 400 as at exactly 10.00am.

The D.A primary A also at New Kokrompe with a total registered voter population of 458 had recorded 101 as at 10.12am when the ISD got there.

At Sanwakyi the Presiding Officer of the D. A primary School Mr. Takyi Joseph disclosed to the ISD that 125 people had cast their votes out of a possible 374 as at 10.38am while 91 voters had cast their ballots at the D. A JHS in the sister town Afrefreso.

The only problem recorded was the attempted relocation of the Anglican primary B center in Atebubu due to its proximity to a giant billboard belonging to one of the Parliamentary contestants in conformity to electoral regulation but which had to be shelved due to the unsuitability of the proposed alternative causing the start of proceedings to delay by 10 minutes.

There was a near altercation between 2 factions about 30 meters from the SDA church A and B centers at New Kokrompe but which was quickly nipped in the bud by community members without the security officer at the center having to intervene.

Both officials and voters the ISD spoke to were of the view that the number of voters would pick up as the day wore on.

Though not much can be said about ‘social distancing” in most of the centers, handwashing, use of masks and thermometer checks was evident at all the stations visited.

The 2 leading political parties the NDC and the NPP had their agents at all the centers.

The constituency is designated a hotspot but authorities including the Election Security Task Force is working hard to ensure a violence-free election.