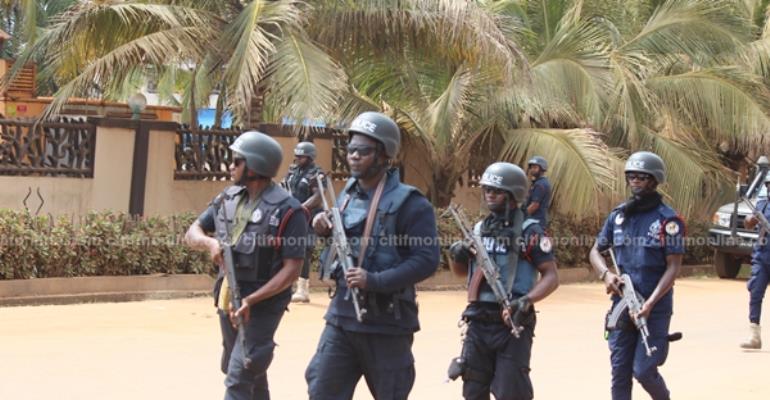 The Police on Thursday, rescued two Nigerians from being lynched at Kwabenya in the Greater Accra Region after they allegedly broke into a boutique in the area to steal.

The suspects, David Adefioye and Taiwo Akintunde, who are currently in police custody, were locked in the shop by angry residents who were intent on lynching the pair.

However, the intervention of the police stopped the incensed crowd from carrying out the act.

Narrating the incident to Citi News, Accra Regional Police Public Relations Officer (PRO), ASP Effia Tenge said two police vehicles were vandalized by the mob while some of their officers were pelted with stones for preventing the residents from unleashing instant justice on the suspects.

“Yesterday, around the hours of 6:30pm to 7pm, we had information of that some two suspected criminals who attempted to break into a boutique at Abom junction in Kwabenya and spotted on a CCTV camera had come back there again. So the owners of the boutique managed to lock up the shop to prevent the suspects from escaping.”

“So when the police got to the scene, we realized that there were a lot of people trying to bring the suspects outside and probably lynch them. So we called for reinforcements to ensure that we were able to keep these people in custody.”

She said the police managed to rescue the suspects “but the crowd did not understand why the police did not release them for them to be lynched and in the process, they vandalized two police vehicles and also pelted some police officers who had to be sent to the hospital to be treated.”

This comes on the back of last Sunday’s attack on the Kwabenya Police station by some armed robbers who killed a police officer in the process and freed seven of their colleagues who were in custody.

The incensed residents’ actions might have been due to a feeling of insecurity following the attack on the security establishment.

Two fugitives arrested
The Inspector General of Police (IGP), David Asante-Apeatu while addressing the media on Friday, disclosed that two of the seven suspects who escaped from the Police station have been arrested.

He added that two persons who aided their escape have also been arrested as well as one other accomplice, belived to be their “spiritual father.”

Asante-Apeatu further called on the public to help them with information leading to the arrest of the remaining suspects and promised to give informants GHc15,000.

–
By: Godwin A. Allotey & Michael Ogbodu/citifmonline.com/Ghana