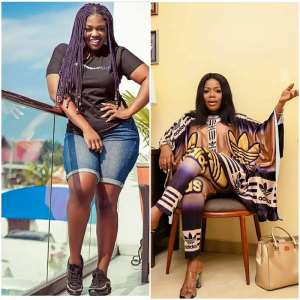 Tracey Boakye has cleared the air on the married man that she is fighting Mzbel over.

The actress and the singer have been engaging in filthy social media feud that even saw Tracy saying that “he said it is out of a mistake that he slept with you once so I should forgive him”.

She added that Tracey is pissed because the man has shunned her too and she thinks she (MzBel) is the reason.

Social media users have since been wondering which married they are fighting over because none of them mentioned any man’s name though they attacked each. It has been speculated that it could be one of the Mahama brothers.

However, Tracy has cleared the air that it is not the former president and people shouldn’t tarnish his image because Mzbel with herself know the man they are fighting over. See a screenshot of her post below.