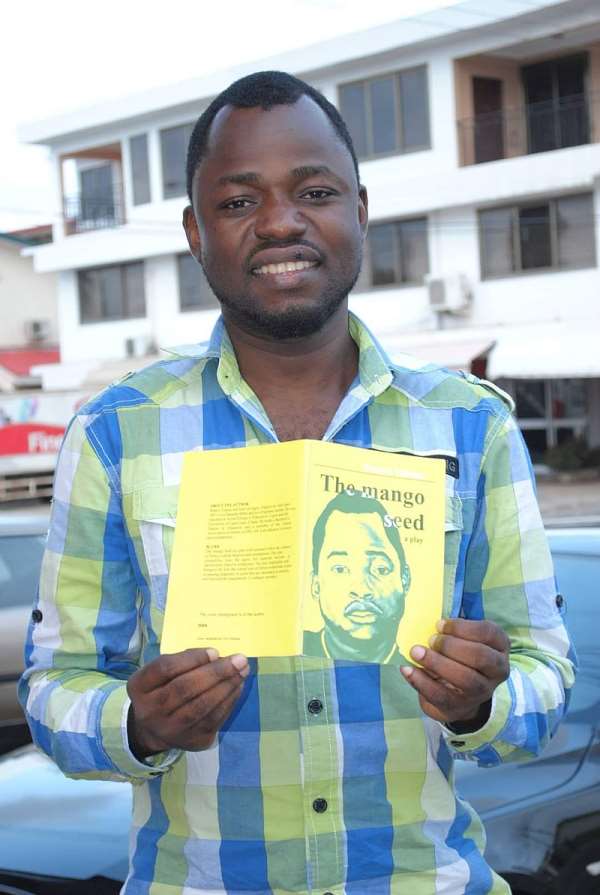 The Mango Seed is Waterz Yidana’s first play. The book was written around 2007/2008 and published in 2013 and republished in 2019. It won the Efo Kodjo Mawugbe’s Prize in Drama in 2019, awarded by the Ghana Association of Writers (GAW). In 2015, Maxwell Owusu, a final year student of the Theatre Arts Department, of the University of Ghana directed this award-winning play for his project work. Hundreds or thousands of copies have been sold to Ghanaian schools and students. It had to be republished because the author made a few changes here and there in the book.

The book highlights on conflict and tradition in African families where the author depicts the beliefs and orientations of the African society and how conflicts are settled amongst them as a people. The play is said to be well situated within the context of the African cultural beliefs and orientations and it exemplifies how the quest for material success is inextricably linked to mysticism. It is also said to highlight and bring to the fore the central role of African traditional rulers in passing judgments on cases that are shrouded in secrecy, well beyond the imaginations of ordinary mortals.

The author who is a graduate of University of Cape Coast and belongs to the Ghana Association of Writers (GAW) also writes for The Mirror, Junior Graphic, GhanaWeb, ModernGhana and many other magazines and online portals. Mr. Waterz Yidana has established himself as a playwright and poet and has received several awards for his works. One of his most notable works titled ‘Madman and the Drunkards’ was adopted in 2019 by the Theatre Arts Department of the University of Ghana for postgraduate studies.

In an interview on GTV, the author made the revelation that he wrote ‘The Mango Seed’ at a time where he knew nothing about writing. He said that the ideas just came to him and he poured them on paper. He also said that he had no support or mentors, he only took the bull by the horns and the results paid off. Ivy league universities abroad have his second play in their libraries and this is a great motivation for other young writers on the African continent.

Mr. Yidana is following the path of great Ghanaian writers like Prof. Kofi Awoonor, Prof. Ama Ata Aidoo, Prof. Kofi Anyidoho, Prof. Lade Wosornu, Mr. Efo Kodjo Mawugbe and others whose books have been adopted by the West African Examination Council (WAEC). Though, he has said several times that the Nobel Laureate, Prof. Wole Soyinka is his mentor. He admires Wole Soyinka’s lifestyle and often says they have a lot in common. Just like Soyinka, Mr. Yidana is an open minded person who is not bothered about religion. His father was a staunch Muslim while his mother who is from a traditional Ewe background got converted into Islam by Yidana’s father, but soon left the religion after the demise of her husband.

Mr. Yidana was a Muslim until his early twenties where he denounced Islam. He saw himself as a free thinker, but later got convinced by his then-girlfriend Jackeline to join Christianity. He attended the Assemblies of God church for about six (6) months and gave up on that also.

His reason was that most Christians are more concerned about worldly things than salvation, therefore he could still believe in God without necessarily being a Christian or Muslim. He stated several times on his Facebook timeline the hypocrisy of religious people and said that he preferred to be a non-believer who did good to humanity.

He said that several people are getting on his nerves, both family and friends, to choose a religion even if he didn’t believe in one. But from the writings of Mr. Yidana, it is clear that he is not the kind of person who lives to please society. He has his own mind and ideas.

He cannot be cowed to do things against his wish. He is brave and fearless and all these are seen in his quotations and articles. He is passionate about pan-Africanism but is quick to criticize Africans for not being proud of themselves and always pulling each other down.

The Mango Seed is clearly a play that is meant to address the issues of the African society, especially, on traditional beliefs and how one can make it in life without necessarily traveling to big cities or abroad. The main character Aziz who was combing the whole city in search of fortune, only got blessed when he returned to his village to do farming. The obstacles he went through before he got successful teaches the youth that nothing good comes easy and that it is only hard work and determination that give success.

Nabla, Aziz’s auntie who cast a spell on the mango tree they were both fighting over believed that she was treated badly because she had no male child. She refused the mango tree the king promised her in his orchard. Aziz’s father, Tindana, was on the side of his sister because he wanted peace in the family, but his wife Adehibla, Aziz’s mother, stood by her son and called Aziz’s auntie names.

The Mango Seed is a great book for every African student. I wish that it is performed on stage over and over again, so that the story can positively impact our generation. The West African Examination Council (WAEC) should adopt it as a subject text for Senior or Junior High Schools in the sub-region. Waterz Yidana is one of the great Ghanaian writers that should be supported and celebrated.