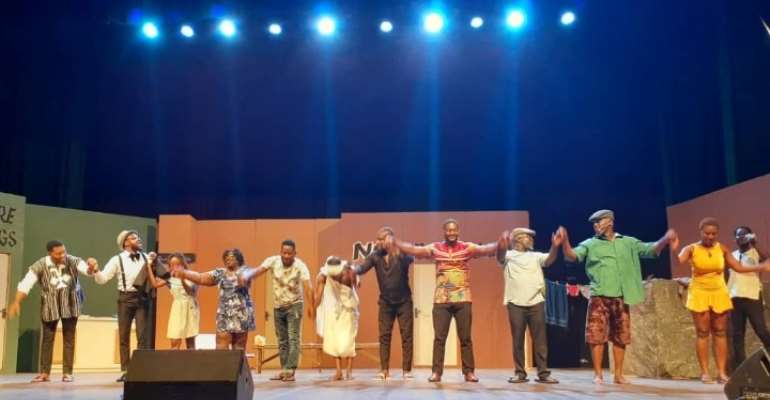 Some scores of stage actors in the Ghanaian movie industry are calling on Government through the Ministry of Arts and Culture to support the creative arts industry from collapsing.

According to them, the industry generates a lot of revenue for the country adding that more attention must be attached to it.

Speaking at the premiere of ‘Fowls 4 Sale’ on Saturday, stage actor, Adeline Adjokatcher said “It is heartbreaking to know that these same ‘Big men and women’ who do not pay attention to stage play most times join section of the masses to watch our stage plays. Creative arts industry generates a lot of revenue; they must pay attention to us”.

She challenged young stage actors/actresses in the industry to show much commitment adding that good works get rewarded with time.

As part of the 5th edition of Ghana Theatre Festival scheduled for 24th to 29th September, 2019, the much awaited ‘Fowls 4 Sale’ satire has been staged at the National Theatre.

The satire showcased the controversial ‘ATAA SOWAH’ who upon being been blessed with three beautiful daughters still stands by the rules ‘No Boys Allowed’ and infringed on the rights of the girls.

Celebrated film actor, James Gardiner revealed that despite the numerous challenges facing the creative industry, he is confident the frequent stage plays will help revive the arts.

He said “I feel the Stage Acting is reviving. Many actors have turned their attention to it despite their busy schedules. There has to be diversity, it always should not be on-screen stuffs. Stage needs the needed attention”.

He also tasked Directors of Stage Performances to adopt better strategies of marketing and funding to attract better patronage both locally and internationally.

Actor Bismark Odoi known in showbiz as ‘Bismark The Joke’ noted that “Since my SHS days, I have loved Stage performances. This is my second professional acting on Stage. I love it because it puts me on the spot. This is where people get to see the real me.”

He challenged the youth to sway from arrogance, be focused and make hay while the sun shines.

He however reminded upcoming stage performers to aim higher adding that no one can be like ‘Bismark The Joke’.

In an exclusive interview with Modern Ghana, Chief Executive Officer of FC Productions, Fiifi Coleman mentioned that the play was a reflection of family values, friendship, marriage and a father’s determination to raise his daughters the best way he knows.

“Ataa Sowah makes a damning discovery. Dede, his beloved prayer warrior is with a child. For someone who lives the life of reclusion, this is a bombshell. This becomes a subject of discussion and ridicule in the home, especially as Ataa Oko taunts Ataa Sowah over the man responsible for Korkor’s ‘Immaculate Conception,” he added.

The Ghana Theatre Festival, initiated in 2014, has grown over the years and has undergone several changes to suit the taste of its yearning audience who want to see various performances and artistic displays during the festival. The National Theatre of Ghana has, therefore, improvised and partnered with a well-selected list of production houses that cuts across all the fields of arts.

The CEO of FC Production says ‘No Men Allowed’ is the next stage play to be premiered.