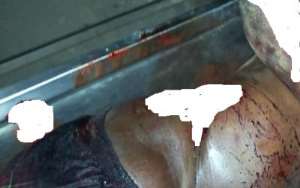 The bounty placed on the head of killers of Adzahli in his residence last Sunday has reached GH¢60,000.

This follows the contribution of GH¢15,000 by the Volta Caucus of Members of Parliament (MPs), some individuals, including former President Jerry John Rawlings, who announced a bounty of GH¢25,000 and the Vice-Chairman of the National Democratic Congress (NDC) in South Tongu, Mr Bright Ahu, who offered GH¢10,000.

Earlier, the Volta Regional Minister, Dr Archibald Yao Letsa, had announced a GH¢10,000 bounty on the head of the criminals.

This follows concerns raised by irate youth at Sogakope last Tuesday over what they termed as ‘failure of the police to effectively act against the rampant violent attacks in the area’ which had resulted in the killing of an assembly member for the town.

The Volta Regional Police Commander, Deputy Commissioner of Police (DCOP) Mr Edward Oduro Kwarteng, who disclosed this at a press briefing yesterday, said those found culpable would be dealt with according to the law.

Last Sunday’s gruesome murder of Mr Adzahli led to a confrontation between the youth of Sogakope and the police, leaving three demonstrators with gunshot wounds sustained from stray bullets allegedly shot by the police in an attempt to disperse the protestors.

The commander said: “At the instance of the concerns raised by the youth regarding the conduct of the Sogakope Police, the command is enquiring into the matters raised to enable it sanction officers who may be found complicit. This assurance is non-negotiable and the results will be made manifest.”

Distress call
DCOP Kwarteng said a team of police officers detailed at the Sogakope barrier, led by Inspector Daniel Mensah, received a distress call about the attack at the home of the assembly member and, together with his colleagues, rushed to the scene of the crime but it was already late, as the deed had been done.

He said the assailants fled the scene, leaving the deceased in a pool of blood, and having injured his wife, child and sister.

He said the police team quickly rushed the injured and the deceased to hospital.

The attackers of the assembly member had initially refused to accept ¢30,000 offered by the victim’s wife in a plea to save his life, but they said money was not the reason for the attack, only to turn round and snatch the money after killing Adzahli.

DCOP Kwarteng said the team discovered six spent cartridges and one unused BB cartridge believed to have been used by the assailants.

“A regional CID team from Ho and the Anti-Armed Robbery Squad from the Police Headquarters in Accra have meanwhile taken over investigations into the incident,” he said.

He called for calm and gave assurances that the outcome of investigations would be constructive and called for cooperation and support from the public.

Another victim
Meanwhile, the victim of an earlier attack at Vume, near Sogakope, about a month ago is still on admission at the Dzodze Hospital.

Residents of Sogakope last Tuesday embarked on a protest march to register their displeasure at the failure of the police to act on the spate of violent attacks.

They blocked the main road through the town, starting from the Sogakope Bridge, and also besieged the Sogakope Police Station, a situation that led to a confrontation between them and the police.