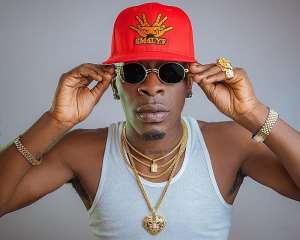 Amidst the Shatta Wale-Stonebwoy VGMA ban brouhaha, the “Ayoo” singer has whipped the award scheme organizers saying, they are the reason why the government ain’t taking the creative art sector serious in this country.

Putting his message across the board, Shatta has categorically stated that, no political party will come on power and will have enough attention for the creative art industry due to the haphazard system of various award schemes running in the country just as the VGMA.

According to him, its very fatuous for Charterhouse to ban him and Stonebwoy from participating in the award scheme going forward, due to the chaotic scene their crash had caused during the 20th edition last year.

He maintained that the organizers of the awards scheme do not have the mandate nor the audacity to ban them from vying for the awards. Referring to the scenario of the tragedy of Kotoko-Hearts Of Oak May 9 crash which had caused the death of many, saying, “even GFA never banned both teams from participating in the premier league”. Stating also that, in every election year, various polling stations records chaotic scenes but there hasn’t been a time that the electoral commission had banned a political party from participating at the national elections.

For these reasons, Shatta has refuted that, the decision of Charterhouse to ban himself and Stonebwoy is very inane and with such conduct, no government would ever take the creative art seriously because such paints various artists as unserious.

Shatta lamented that, Charterhouse aint a national musicians union, hence they should stop acting as such. They never control the business affairs of various musicians in the country and should remain in their lane before he unleashes his fans to cause chaos at their event to see Charterhouse closed down.