Home Showbiz Shatta Bundle Is A Rich Nigga With Only ¢50 In His Account... 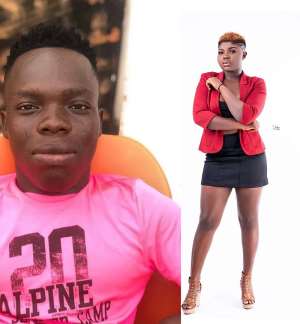 Not long ago Doris Inkoom known in the showbiz fraternity as CHIKEL BAIBE who claimed to be possessed by Ebony’s spirit completed her second cycle education and started chasing her dream in the music industry.

Chikel Baibe’s current branding and lifestyle and how she is soaring to different level in the music industry with her deep voice leaves great evidence that she has overthrown top Ghanaian female artiste like Wendy Shay, Becca, Fantana, and others.

As it is common to every lady who advanced from being a youth to adult, marriage or dating is presumed to be their next move. As part of every lady’s dream, dating or marrying a billionaire like Shatta Bundle will be one of their greatest wish but this young talented singer Chikel Baibe sees opposite.

Answering a question presented to her by a report during her current music launch MY TIME, Chikel Baibe asserted that dating or marrying Shatta Bundle is not all that bad but it is very risky to date or marry a guy like Shatta Bundle whose wealth or money is only seen on Social Media but in reality he has only 50 Ghana cedis in her account.

Report: “ As you have completed school and now doing a serious in the music industry, as we all know that you will become one of the successful female musicians in Ghana, is it part of your dream to marry or date a billionaire like Shatta Bundle?”.

Chikel Baibe: “ Ok, Marrying a guy like Shatta Bundle is not all that bad, He is very handsome , but the side effect of dating of marrying him is , He will end up wasting your time since his wealth or money is only seen on social media , As a lady if you follow his hype and fall in love you will end up crying since he will have nothing to offer you. In reality I think Shatta Bundle has only 50 cedis in his account,It is just a hype don’t take him serious and end up blaming witches in your house”.

Chikel Baibe just released a new single tagged “My Time which she featured the most recognize fantse rap king “Teephlow” about a week ago and the song is trending all over the place. This indicates that, Chikel Baibe won’t joke with her music.