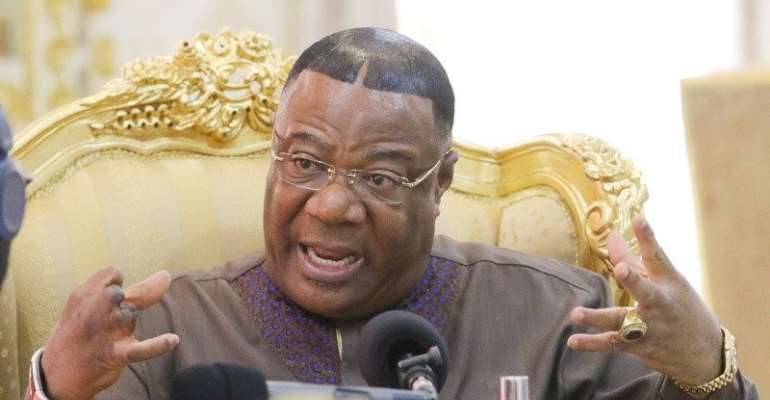 Archbishop Nicholas Duncan-Williams said there is more to sex than just the pleasure of it as many believe.

He indicated that sex is a spiritual transaction and has implications for those who engage in the act.

The founder of the Action Chapel International Ministry (ACIM) added that when two people have sex, there is an exchange of fluids between the two which binds the spirits of the two together.

He further explained that many people are held hostage spiritually by another because of the exchange in sex.

According to him, when that exchange happens, the one who has a weak spirit can be manipulated by the other who has stronger and powerful either for good or ill.

In exemplifying what he meant, he gave a narration where a man married and on their honeymoon night, the wife told the man that she was going to the witchcraft world.

The surprised husband asked, “why.” The lady replied, “I’ve finished my assignment.” When asked, what that assignment was, she replied, “That was to marry you.”

In explaining the above, the Archbishop indicated, “The Bible said, he who sleeps with a harlot, is one with a harlot.”

“Meaning sex is marriage and anytime you sleep with somebody, you become one with the person. You become a partaker of the person’s anointing and spirit and DNA and the person becomes a partaker of your DNA as well.

“So, if you sleep with a witch, you become a partaker of a witched auction and anointing and the witch becomes a partaker of your anointing. There is exchange and it’s a transaction.

He continued, “the man had become one with the witch because of the exchange through sex, it was going to be easy for the witches to manipulate this man for their end.”

The ACIM founder said this in a sermon he delivered to a congregation in a Facebook video posted by F A Boateng.

The man of God noted that one can be forgiven of the sin of sex committed against God but once the exchange has taken place between the two, it becomes a challenge one must grapple with.

Archbishop Duncan-Williams gave another example where a lady had problems with breaking up her relationship.

According to him, the lady said the man was very good to her and they had several sexual encounters but the lady came to church, confessed and was prayed for.

He added most times the lady would go back to her partner and they would have sex.

Archbishop Duncan-Williams continued that, one day, the man told the lady that “part of you is with me and anytime and I want you, I have to activate the part of you with me and you will come because we are one”.

The man of God said he counselled the lady to appreciate that, confessions shall guarantee her forgiveness but she had to “pronounce divorce, you have to annul, break and splash the soul tie and disentangle your soul from him and recall the part of you that had gone to him and return the part of him that had come to you to him. To free yourself.”

Based on the above example, Archbishop posited that the art of sex makes people leave a part of themselves with the people they sleep with and that could be negatively used against them especially when their partners dabble in black magic or worship the devil.

Concluding his sermon, Duncan-Williams remarked that, God forgives sins including sexual sin but it is the complications and the dangers associated with the act that the believer must deal with.

“Because if you sleep with a witch, Jezebel has you and you cannot overcome Jezebel with anointing because Jezebel is anointed and not afraid of your anointing.

“It is not how anointed you are or how you can teach or preach or gifted you are but it is spiritual purity that can deal with Jezebel,” he emphasised

Revealed: What TB Joshua said about succession plans in final interview before death