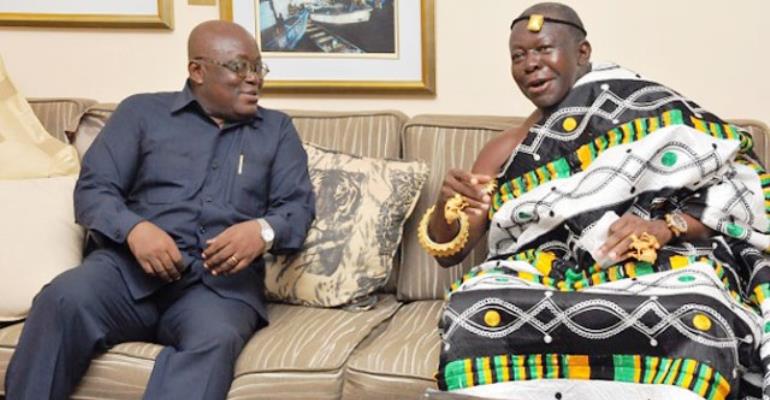 President Nana Addo Dankwa Akufo-Addo met the Asantehene in a closed door meeting at the Manhyia Palace in the early hours of today [Tuesday].

The meeting, according to sources was to address recent concerns Otumfuo Osei Tutu II raised over attempts by some persons in government to denigrate his stool.

Though sources will not disclose what transpired during the meeting, it is believed that the President was there to address the very issues Otumfuo raised last week about the conduct of the NPP in Kumasi.

John Boadu
A few days ago, the acting General Secretary of the NPP, John Boadu revealed that some leading members of the party knelt before Asantehene to assuage his anger.

Media reports suggested that the Asantehene was angry due to claims that some persons close to the government were attempting to pitch him against the Akyem tribe in the Eastern Region.

Mr. Boadu said they took the decision to plead for clemency in a bid to appease Otumfuo.

“We saw from his [Otumfuo’s] speech that something was going on that he was unhappy with….he was complaining about it. You know that as part of our culture if you are a child, you can’t have a dispute with an adult and be guiltless. No matter what, because we were in front of a revered person, we had to give him the necessary respect. So that is why when he started complaining, and we realised that from the way things were going, we had to plead for forgiveness,” he had stated on Asempa FM’s Ekosii Sen last Friday.