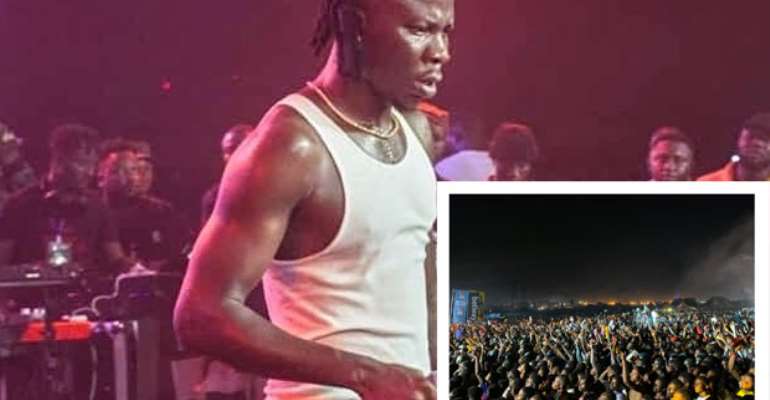 Stonebwoy at the 2019 ‘Ashaiman To The World’ concert. INSET: The crowd at S tonebwoy’s concert

Stonebwoy pulled yet another huge crowd for the 2019 edition of his ‘Ashaiman To the World’ concert.

The concert, which took place at the Ashaiman Saka Saka Park on Saturday night, brought together over 40,000 music fans from far and near to celebrate and jam to performances from Stonebwoy and other artistes billed for the show.

Shatta Wale and Stonebwoy performed together to further drum the current peaceful relationship that exists between them. They hugged each other intermittently and held hands when Shatta Wale performed his songs.

At a point, the crowd became uncontrollable when Stonebwoy was performing. The fans allegedly didn’t like how they were kept afar from stage. This led to an ugly brawl between them and the security, forcing them to dismantle the barricades to get closer to the stage.

This year’s ‘Ashaiman To The World’ was held in partnership with BTL Africa, a pan-African marketing and technology solutions company.

The concert was hosted, among other objectives, to celebrate Stonebwoy’s achievements on the music scene, promote his works and show love to the people of Ashaiman. The concert also served as a platform for several up-and-coming artistes who performed to promote their talents.

Ahead of the concert, a health screening was held at the Mandela Park, Ashaiman, on Friday as a means to give back to the society.