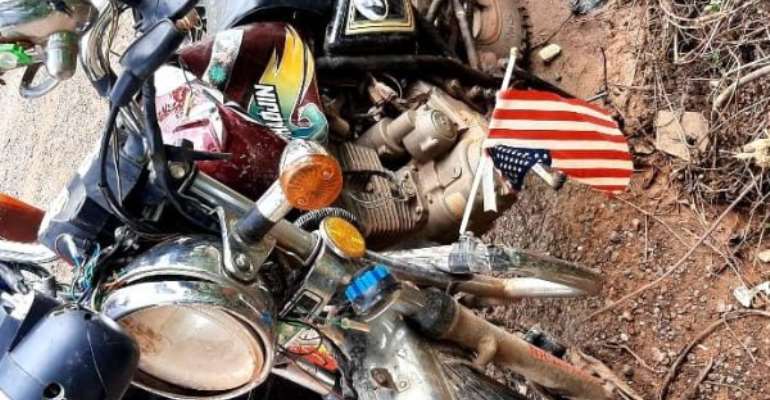 One person was killed and another sustained various degree of injuries when an unregistered Haojin motorbike on which they were travelling, crashed into a stationary vehicle at Wassa Nkran in the Prestea Huni-Valley Municipality.

The deceased was identified as Isaac Jesah, 33, a small scale miner.

The injured, Korku Amekoufor, who is 29 year-old and a foreigner, was rushed to the Apinto Government Hospital for treatment.

Chief Inspector George Kwabena Osei, a Detective at the Tarkwa Motor Transport and Traffic Department (MTTD), who confirmed the incident to the Ghana News Agency, said the accident occurred at about 0730 hours on Monday May 25, this year.

He said the Toyota Hilux pickup with registration number GR 9204-09 which they crashed into was being driven by one Samuel Nyame, who was driving from Daboase Benso road towards Wassa Nkran.

Inspector Osei said when the Pickup driver arrived at Wassa Nkran community, he parked the vehicle on the shoulder of the road and visited some of his farm attendants who were working on his cocoa farm.

He said the deceased and the pillion rider who were travelling from the same direction bumped into the stationary Pickup killing Jesah instantly.

He said Jesah’s body has since been deposited at the Apinto Government Hospital morgue for autopsy.

The accident vehicle has been impounded at the Tarkwa police station and the driver is in custody to assist in investigations, Inspector Osei said.