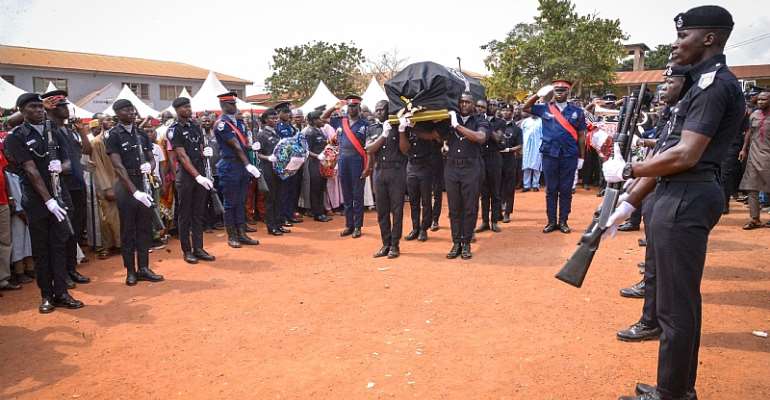 In a bid to provide greater protection to the men and women of the Ghana Police Service, Government has ordered the police administration to equip all officers of the Motor Traffic and Transport Department (MTTD) with weapons when on duty.

As well, all officers who go on “outside duties” including snap checks, guard duty at banks and filling stations will now be issued with weapons, bullet proof vests and helmets to be able to protect themselves.

The Vice President of the Republic, Dr Mahamudu Bawumia, announced these enhanced security measures when he joined family and friends at the burial ceremony of L/Cpl Mohammed Awal, who was slain in the line of duty, at Abuakwa, a suburb of Kumasi on Friday 30th August, 2019.

L/Cpl Awal and Sgt Michael Gyamasie stationed at Kasoa MTTD, were shot and killed by suspected armed robbers at Aplaku near Kasoa on Wednesday, August 28, 2019 The Ghana Police Service has confirmed the arrest of three persons suspected to be involved in the murder of the two officers, while a bounty of Ghs10,000 has been placed on a suspect, Eric Kojo Duah, who is on the run.

The murder of L/Cpl Awal and Sgt Gyamasie brings to five, the number of unarmed police officers killed in recent times.

Speaking at the family house of L/Cpl Awal, Vice President Bawumia, who is also Chairman of the Police Council, consoled the families of all the slain police officers.

“I came here today in a very sad mood. Government is very much disturbed by what happened on Wednesday 28th August leading to the loss of two police officers, namely Sgt. Michael Gyamasie and L/CPL Awal Mohammed in the line of duty. This development of violence, maiming and killing of security officers going about their lawful duties to protect lives and property in the country are acutely distressing.

“On behalf of the President, Nana Addo Dankwa Akufo-Addo, I convey the heartfelt condolences of the entire government to the bereaved families, and pray Allah for a peaceful rest to the souls of our beloved. We assure you of the prayers and support of government in these trying times.”

Government, Vice President Bawumia stated, is committed to ensuring that the Ghana Police Service receives the necessary equipment to discharge its duty, especially in the wake of recent killings.

“In the last month five unarmed police officers have been killed by criminals in the line of duty. This is unacceptable and the government will not sit down for this to continue. Henceforth all officers of the Police Motor Traffic and Transport Department (MTTD) will now be armed to ensure their protection. Also all police officers who go on “outside duties” will now be armed with weapons, bullet proof vests and helmets to be able to protect themselves.

“Thankfully, just this week, 4,500 bullet proof vests have been delivered to the Police to help stem these unfortunate incidents. I urge police officers to wear the bullet proof vests and not say that they are uncomfortable to wear. Other logistical items have been delivered to the Police including non-lethal weapons. Government will continue to support the Police and more logistics will be delivered soon. We must protect our police for them to be able to protect us.

“We are retooling the Service and Government has delivered 567 vehicles to the Police service since 2017. We have also given clearance for the recruitment of 4000 officers into the Service to boost the numbers.”

The Vice President urged Ghanaians to see the police and other security forces as “our family members, friends, and protectors. As a nation we must all remember that peace and security are two cardinal necessities in life and those who have elected to sacrifice to help us maintain peace and order ought to be respected and protected.”

Vice President Bawumia eulogised Sgt. Michael Gyamasie and L/CPL Awal Mohammed, describing them as “two hardworking officers who discharged their duties creditably in the interest of the nation and should therefore not suffer this unfortunate fate. These gallant men will forever be remembered for their acts of sacrifice for the nation. Any life lost is a life too much.”

The management of the Service, he added, are working hard to bring the perpetrators of the murders to book.

“I have full confidence in the IGP and his men to work hard to bring the perpetrators of this dastardly act to book. We are going to go after the attackers”, he declared. 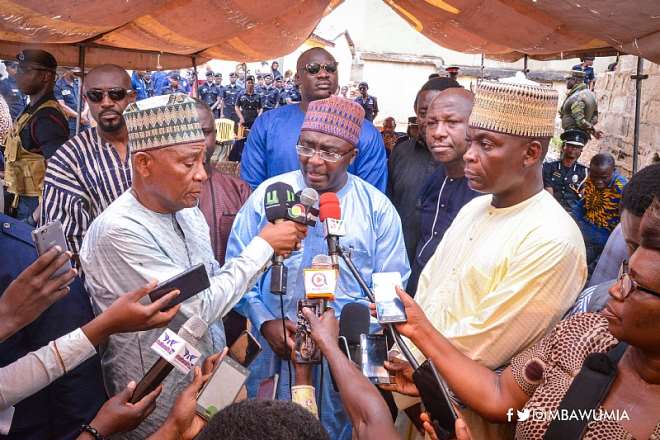