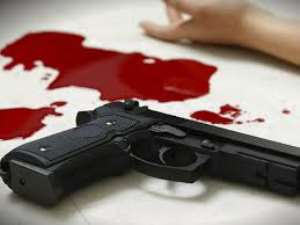 A member of the ruling New Patriotic Party (NPP) in the Dormaa West Constituency of the Brong Ahafo Region has been shot dead by thugs of his own party who were on rampage on Saturday.

The victim identified as Kofi Labet was shot at the district’s Electoral Commission office where the mop-up registration took place amid confusion which overwhelmed the security personnel on the group.

In a press release signed by two of the NDC party executives in the Region, it noted that the lawlessness began at dawn of yesterday, August 8 when the NPP hoodlums besieged the EC office in order to take control of the security of the exercise.

“These acts of lawlessness and utmost disrespectful for law and order by the NPP MP and his bunch of blood thirsty rebels with impunity and abuse of incumbency in the name of ‘our government is power’, reached its uncontrollable level on the 08/08/2020 leading the death of Kofi Labet,” the statement noted.

It added that these truant rebels in the course of the sporadic, footloose and fancy free shoot out at the NDC members unfortunately misfired and shot at one of their own, Kofi Labet, who died instantly.

NPP MP AND HIS REBELS VIOLENCE LEADING TO DEATH OF KOFI LABET CONDEMNABLE.

The National Democratic Congress in Dormaa West Constituency is appalled with the impudence, violence and impunity that has characterised the voter registration exercise by the New Patriotic Party Member of Parliament, Hon.Ali Maiga Halidu and his rebel group which has led to the untimely death, Kofi Labet, an NPP member, who was mistakenly shot by the violence infested rebels with others sustaining various degrees of injuries.

The violent activities of Hon. Ali Maiga Halidu, and his rebels in once peaceful and serene political environment has led to state of anarchy and pandemonium.

The good people of Dormaa West, the security, Nananom , opinion leaders and faith based organizations have known no peace since the NPP and Ali Maiga took over the reigns of power in 2017, which the voter registration exercise is no exception.

These acts of lawlessness and outmost disrespectful for law and order by the NPP MP and his bunch of blood thirsty rebels with impunity and abuse of incumbency in the name of “our government is power”, reached it’s uncontrollable level on the 08/08/2020 leading the death of KOFI LABET.

The events and circumstances leading to this unfortunate and barbaric incident by the NPP hoodlums can be summarised as follows;

1. The NPP rebel group besieged the office of the Electoral Commission where the mop up exercise of the voter registration was taking place at dawn, ostensibly to manage the security of the place.

2.The Military and other state security lost control of the situation and were prevented from maintaining law and order from the early hours of 8th August by these hoodlums.

3.The NDC led by the Parliamentary Candidate and Constituency Chairman, Hon Vincent Oppong and Asamoah and Alhaji Seiba Abdullai, respectively, in consultation with leadership of the NDC decided not to allow the NDC members to go anywhere around the Electoral Commission’s office which had by then been taken over by NPP rebels in order to prevent any possible clash.

4.The NPP rebels under the instructions of the part’s youth organizer, Acquah Ibrahim, and two biological brothers of Hon Ali Maiga, under no provocation attacked and beat to pulp, one Chairman Seidu, an NDC branch chairman who is currently receiving treatment at Nkrankwanta District Hospital.

5.These uncivilised rebels attacked, Mr Charles Asante, an executive member of the NDC who was driving some few meters away from the EC’s office to purchase fuel into his car and smashing rear screen and other parts of his car.

6. These NPP hoodlums/rebels had secured all the entry points leading the E.C’s office, thus, assaulting or turning away any known NDC member from registering.

7. As at 2pm, no NDC member or supporter had been able to register and the only agent of the NDC had been prevented by the NPP agents and an EC official by name, Amofa, from issuing any challenge form against supposed intruders as stipulated by the electoral laws after he had successfully challenged three people. It’s important to note that, the NDC, at this point had only one agent at the EC’s office, the deputy youth organizer of the NDC, Don James.

8. As a peace loving and law abiding political party, the NDC approached and pleaded with the EC officials and security agencies to send the rebels from the EC’s office to provide fair and level playing field but these pleas yielded no results for six continuous hours.

9. In the late hours of the day, some NDC supporters moved to the other side of the road to the EC’s office, opposite where the NPP’s rebels were seated.

10. This move by NDC supporters infuriated the rebel group resulting in the the driver of the MP, Bugi, who stormed out of the registration centre with top speed, only to return with sporadic shooting.

11.The harmless and unarmed NDC supporters were now at the mercy of this known notorious criminal, BUGI, driver of Ali Maiga, who was shooting aimlessly at NDC members, which resulted in one, Kwame Grutan, sustaining gun shot injuries and is currently relying on the mercies of God and Doctors at Sunyani Regional Hospital.

13.These truant rebels in the course of the sporadic, footloose and fancy free shoot out at the NDC members unfortunately misfired and shot at one of their own, Kofi Labet, who died instantly.

May his soul rest in peace.

The NDC in the Dormaa West constituency wish to at this stage call Nananom, the Security agencies, Opinion Leaders, Local council of Churches and Civil Society Organizations to call the NPP Member of Parliament for Dormaa West Constituency and his loose rebel group to order before they destroy the peace we have been enjoying in the area.

The people of Dormaa West need good roads, electricity, schools, Hospitals, farm inputs from the failed Ali Maiga Halidu and the NPP but not Gun Shots and uncultured display of machoism.