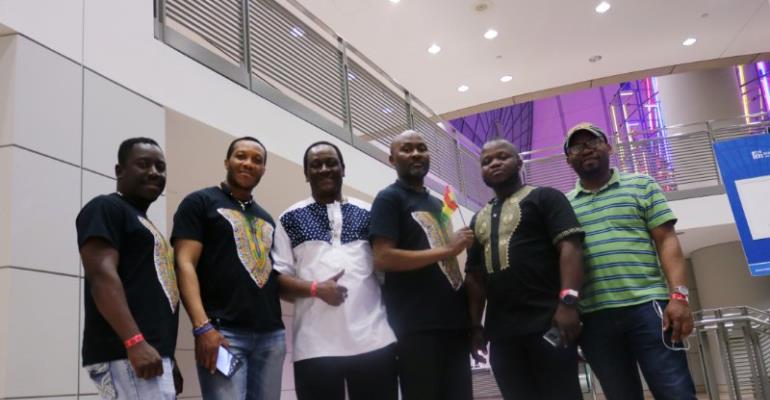 Ghanaian food won second place but also for the first time, Ghanaian music was present and stole the show with many in the audience dancing at the 2018 Embassy Chef Challenge (ECC) held on May 17, 2018, which saw Executive Chef Francis Otoo of Ghana place second; winning both the Judges’ and People’s Choice Awards by cooking jollof and lamb.

Before the Embassy Chef winners were even announced, Ghanaian smooth-jazz guitarrist Nathan Pryce and his ‘Dreams’ band entertained the audience to a mix of AfroJazz and Highlife music from the recently released “Dreams” CD.

The group put up a remarkable performance which excited the interest of the audience. Noticeable among the dancing crowd was His Excellency Dr. Barfour Adjei-Barwuah, Ghana’s Ambassador to the United States who got to his feet to join the crowd as they danced to tunes from the Ghanaian band who had the crowd dancing at the atrium of the Ronald Reagan Building and International Trade Center in Washington, DC.

ECC provides a taste of the world’s foods to the diplomatic community, politicians, and businesses on the Capitol hill and people interested in culinary arts within the diplomatic corps of Washington, DC. This year the chef of the Philippines Embassy Sincioco-Mateo won tops in both the Judges’ Choice and People’s Choice categories, beating chefs from 27 other countries.

In an interview later that night Nathan Pryce told TheAfricanDream.net that he was “excited to see Chef Otoo take 2nd place for Ghana and Africa and to also see Ambassador Adjei-Barwuah and his entourage from the embassy dancing to every tune in front of the stage as we performed selected songs from the recently released ‘Dreams’ album. I can’t tell you how exhilarating that was, my crew and I also truly appreciated all who positively responded to us,” he said.

As he shared his excitement with TheAfricanDream.net after the performance Nathan Pryce disclosed that “I love authentic Ghanaian highlife and jazz music and for me and my colleagues to receive this great opportunity on this great stage to perform to a global audience tonight is truly a dream come true. We couldn’t have been even happier to hear after our performance that Ghana’s Chef Otoo finally wins a double-award having competed at the ECC for 5yrs now.”

A few members of ‘Dreams’ not present during their ECC performance were renowned Ghanaian flutist Dela Botri , and guitarists’ Sam Awuku Apau and David Aidoo. Present to perform however included Michael Turkson, Samuel Ofosu aka Pompor, and Francis Akrofi who were all gracing the ECC stage for the first time.

Some numbers performed by the group included songs like ‘Agro be sor‘, ‘All for you‘ and a few songs from the group’s ‘Dreams‘ album produced by Nathan, which has 6 tracks on it including ‘Goodnight’ , which was released as a single in March 2018 on Audiomac.

Information available to this writer indicates that Nathan Pryce and his ‘Dreams‘ will be performing at the 2019 edition of the ECC. For now though, the album will soon be available on online music stores through CD Baby. Email contact@oralofori.com to book Nathan Pryce and the ‘Dreams‘ or to get more information about new CD and the group