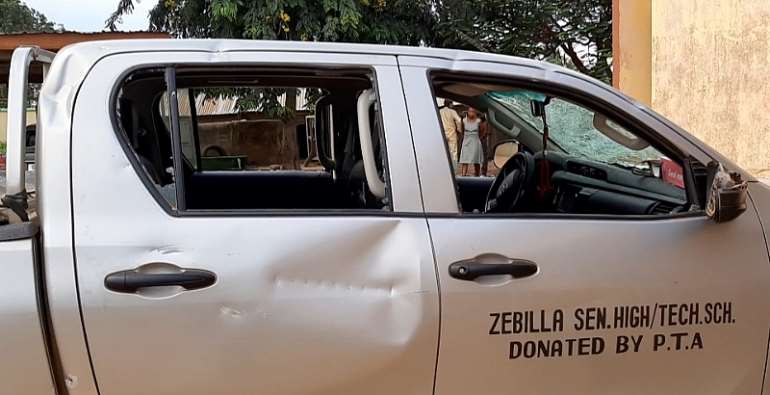 Reports reaching ModernGhana reveal that a combined team of police and military personnel on Saturday 25 July in the night chased out third-year students of the Zebilla Senior High Technical School from campus for rioting and vandalising school properties.

Our reporter narrated that the school’s Headmaster Richard Ayabilla Akumbas stormed the boys dormitory over reports of illegal connections and charging of mobiles by some students.

The Headmaster who seized some phones and warned the students from engaging in illegally connections they have done in the ceilings to be charging their mobile phones did not sit well with the students who started the rioting.

The rioting students, according to our reporter pelted stones at some teachers and destroyed school properties.

The rioting students vandalised the headmaster’s private car, his wife’s car, the school PTA Toyota Hilux, the school bus, the new digital school notice board, fluorescent bulbs in most parts of the school, louvre blades of the dining hall, veronica buckets and stands, tables and chairs, school motorking, motorbikes belonging to the teachers, provision shops, the school sound system, ceiling fans, students notice board and streetlights.

Headmaster’s private carMr. Richard Ayabilla Akumbas told our reporter that the security personnel were called in to assist after they had tough time bringing the situation under control.

The Headmaster indicated that he was in his Bungalow at around 10:00pm when a student came knocking at his gate.

According to him, the student reported that some of his colleagues on campus were gathered at Sankara House expressing anger over the seizure of their phones and the punishment meted out to them.

The Headmaster noted that he and a Senior Housemaster quickly rushed to the dormitory where the students had massed up in anger and acting rebellious towards them and sensing danger called in the security personnel.

The students, upon the arrival of the security personnel, started pelting stones at their vehicle prompting the police to fire a warning shot to disperse them.

The broken wallThe students after unable to scale the school’s fence wall pulled it down and escaped from the campus.

Some of the students numbering about 50 run to the Palace of the Zebilla Chief claiming they were beaten and chased out by security personnel.

The Zebilla Chief Naba Beliabelim-win Azumbilla Ndaugo called the school’s Headmaster to report to his palace where the students were seeking refuge.

The Headmaster after explaining to the Chief conducted a search on the students were stolen items were found on them.

The items which include biscuits, toothpaste with brushes, sugar, gari, soap, pomade and others were items they allegedly stole from the provision shop they vandalised.

The ring leaders of the crime were taken to the police station for further questioning while the remaining students were chased back to the school to face other punishments.