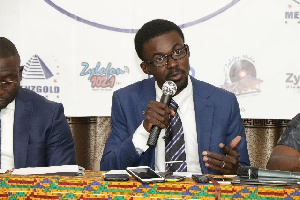 Officials of a payment company that was appointed by Menzgold to negotiate settlement with its unpaid customers have been arrested.

In a press release issued in Accra on Friday, the Economic and Organised Crime Office (EOCO) revealed that officials of the digital payment, marketing and promotions company were picked up because they lacked the requisite licence to operate.

“Initial investigations have revealed that the company was operating without the requisite licenses from either the Bank of Ghana or the Security and Exchanges Commission,” EOCO explained.

Menzgold appointed Payboy as a third-party entity to negotiate the settlement with the thousands of customers of the failed gold dealership firm.

Menzgold said in a statement at the time that the company will negotiate and facilitate the payment of the investment of its customers whose investments are still locked up.

The Bank of Ghana collaborated with other regulatory agencies to pull the brakes on the activities of Menzgold some two years ago over regulatory issues, bringing to end what many say was a Ponzi scheme.

It is estimated that the failed gold dealership firm owes up to $42 million in accrued investments and principals.