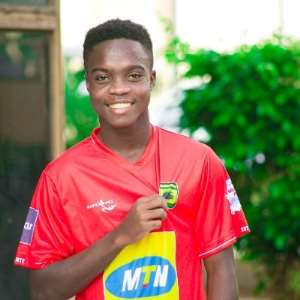 The talented 16-year-old spent a week with the German giants last week on the back of his outstanding exploits with the Porcupine Warriors in the ongoing Ghana Premier League season.

After what has been described as a very successful trial by his manager Sammy Anim Addo, Mathew Anim Cudjoe has joined his Kotoko teammates as they begin preparation for their next encounter in the division against Ashanti Gold.

On his return last weekend, Reds manager Maxwell Konadu says he welcomes the prodigy back into his team.

“Yeah he is one of us and we welcome him back into the squad. He was away for one week. He went there and did well.“We heard that they were very happy with him. They want him but once he is here he will definitely be part of him”, the experienced tactician said.

Mathew Anim Cudjoe is training with Asante Kotoko and is in contention to enjoy some minutes next weekend when the Reds take on the Miners at the Baba Yara Sports Stadium.