Home Politics Mahama Made Boys Who Couldn’t Rent For Themselves As Ministers – NDC... 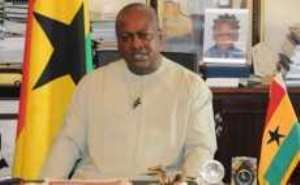 NDC MP for Yunyoo, Hon. Joseph Bipoba Naabu has given a detailed account as to why the party lost the 2016 general elections.

In his view, President John Dramani Mahama was a huge contributor to the party’s defeat when he appointed “young boys who couldn’t even hire a chamber and a hall” as ministers of State to help him run the economy knowing very well that they had no experience in politics.

In an interview with some journalists of the Parliamentary Press Corps, the Yunyoo lawmaker also revealed that that arrogance of the President Mahama’s Ministers also contributed to the defeat the NDC.

Below is a transcript of excerpts of the interview:

“The arrogance of most of the Ministers was very serious and it affected their elections. I don’t want to mention names. I know a minister went to his constituency and told a former MP that, that MP was not qualified to be a minister and that is why he was not made a minister and he is qualified that is why he was made a minister. Can you imagine… which was not good. And most of the ministers that were appointed under NDC – they were young boys who have not been able to settle down well. Some of them just came from school – they couldn’t even hire a chamber hall for themselves – they cannot even buy a bicycle. When they were made ministers and deputy ministers, within a year or two they were riding in posh cars. With me they had no experience and that affected us.

He added: “You can see that we lost the Vice-President’s constituency and that of President Mills’ constituency. That of the Minister for Education, Prof Nana Jane Opoku we lost her constituency as well. General Mosquito we lost, Mark Woyongo we lost, Baba Jama we lost, because of arrogance. Ask for the Minister of Education, some of them were just brought from nowhere. We don’t know even how the President appointed them and the President did not appoint those people who actually deserve as NDC members. The President went and brought outsiders and that is why we loss and why didn’t we lose? His appointment was very bad. Look, it is not everything that we will talk.

Hon. Naabu continued: “Go and take the Konkomba issue – I am not trying to be tribalistic now that I want to raise ethnicity issue but in politics we can’t do away with ethnicity. Even when you go to Legon to study Political Science, we have something we call ethnicity in Ghanaian politics – so we cannot do away with ethnicity. President Mahama did not appoint Konkombas. We were eight Konkombas on NDC ticket in Parliament and none of we the members of Konkomba were made a minister or deputy minister. That even affected the Konkombas and my brother, Bugri Naabu, the Regional Chairman – he used that and ensured that the whole of the Eastern Corridor we loss to the NPP, why?