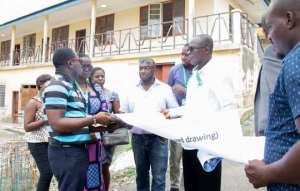 Kwame Nkrumah University of Science and Technology (KNUST) is set to open a new Satellite Campus at Obuasi in the Ashanti Region for the 2019/2020 academic year.

A statement issued by the KNUST and copied to the Ghana News Agency said Professor Kwasi Obiri-Danso, Vice Chancellor, KNUST, led and a delegation from the University to pay a working visit to the Obuasi Satellite Campus to inspect renovation works ahead of the official opening in September.

The statement said briefing the management team of the University after the tour of the premises, Mr Stephen Teku, the Municipal Works Engineer, said the first phase of the renovation was almost 80 per cent done with the remaining 20 per cent set to be completed before the end of August.

The statement said the facility which was donated to KNUST by AngloGold Ashanti through the Obuasi Municipal Assembly falls under the Mining Company’s ”Assets Relinquishing Programme”.

“Under the programme, old assets of the mining company are being given out to potential stakeholders who could maximise them for the benefit of the community and the country,” it said.

“The edifice is made up of the entire old administration block of AngloGold Ashanti, and will serve as; lecture rooms, offices, bungalows for visiting professors, hostel facilities for students, study rooms, and a library.”

It said additionally, the mining company and the Municipal Assembly have agreed to bear the initial cost of renovation estimated at GH¢96,000.00 before the handover.

The statement said the KNUST on its part would take care of the soft furnishing.

Prof Obiri-Danso expressed his excitement on the progress of the renovation and was hopeful the campus could begin its academic operations by September, with initial student’s population of about 700.

Mr Elijah Adansi-Bonah, the Municipal Chief Executive of Obuasi, said the Campus would contribute to the development of the Municipality.

He said apart from creating direct jobs for the citizens of the Obuasi and its environs, the presence of the Campus could spur up business activities for food vendors, retail shop operators, hostel facility operators and many more.

He expressed the hope that other market driven programmes would be added when existing facilities expand in the future.