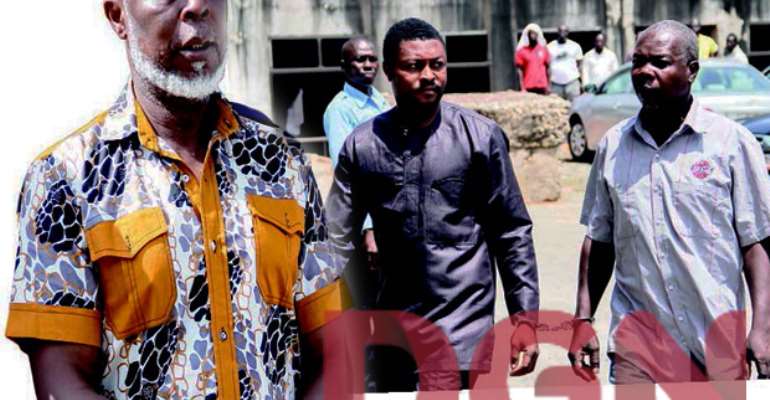 The name of a soldier at the Jubilee House is among those being suspected over the ‘Alajo Doctor’s coup plot.’

So far, Corporal Zakaria Waheed is among 11 others who are under investigations over their implication in the plot to destabilize the country and overthrow the government. His attachment to the seat of government where he has served for a while now as a guard has jolted many who have been following the story.

The development feeds into the scenario of the detonation of the Improvised Explosive Devices (IEDs) and the subsequent kidnapping of the President as contained in the telltale video evidence now in the custody of investigators at the Bureau of National Investigations (BNI) and the Defence Intelligence Directorate of the Ghana Armed Forces.

His appearance on the list also presents him as a ‘valuable asset’ — a term used in the spy community for important sources of intelligence.

Investigators would, for instance, want to find out details of his interactions with those who engaged him for the destabilization project, among other details.

The ultimate objective of the coup plotters can only be achieved with the involvement of somebody within the security details at the seat of government.

The decision of the plotters to get a suspect as Cpl Waheed could have been informed by this reality.

The extent of his involvement would only emerge when the court proceedings into the case are at an advance stage and especially when he enters the dock.

The video recording about the various scenarios which a few people have been privy to suggests that the IEDs are packed with an immobilizing chemical, the inhalation of which incapacitates those within the vicinity of the explosion.

Of the number of soldiers who have made an appearance at the court, Cpl Waheed attached to the Jubilee House, Sgt Awarl Sule of the Military Academy and Training Schools (MATS), Teshie, Cpl Nazine and Sgt Nantoma Jones were not a part.

This suggests that investigations and subsequent charges against them are not yet completed hence their non-appearance in court.

Although investigations are ongoing, Cpl Waheed’s colleagues especially are at their wit’s end as to how he could be implicated in the matter. They are also worried about who to trust among their colleagues.

Ten soldiers — some other ranks and senior non-commissioned officers — are WO2 Esther Saan aka Mama (G) of MATS who has been charged already and made an initial appearance in court; L/Cpl Sylvester Akanpewon aka Sly of the 49 Engineer Regiment; Cpl Zakaria Waheed, Jubilee House; Sgt Awarf, MATS; Leading Aircraftman Ibrahim Baba of the Air Force Base, Tamale; and Leading Aircraftman Abubakar Sadique, Air Force, Takoradi.

Of the Air Force personnel arrested, it is clear that they come from the two bases of this arm of the Ghana Armed Force, Accra, Tamale and Takoradi.

It is unknown what their role would be in the plot since they have no authority in the movement of aircraft unless perhaps theirs was to get Air Force personnel in charge of regimental duties for firepower in one of the phases of their operations.

There is an Engineer Regiment soldier who could be there because of the unit’s role in the handling of bombs, detonation and so on.

This unit is also responsible for the construction of bailey bridges for emergencies and blowing them up to retard the movement of troops.

With a heightened planned use of IEDs, the hiring of sappers is an important aspect of the coup project.

Perhaps with the arrested soldiers from this unit, valuable information could come the way of the investigators if they have not gotten that yet.

With more persons related to the plot now singing to the ears of interrogators, more pieces of evidence are being assembled.

The 11th suspect, Col. Samuel Kojo Gameli, the most senior military officer among the suspected plotters, is said to have made important revelations, something which would be valuable to the court when he makes his next appearance and subsequent ones.

Dr. Frederick Yao Mac-Palm’s IED production plant, the first of its kind in the country, in spite of its ability to destroy lives, with its high TNT capacity yet to be disclosed to the public, has been ridiculed by some opposition elements including former President John Mahama who described the project as a ‘bentua coup’.

According to him, one of the displayed firearms looked like a ‘bentua’ or enema syringe.

Those who think that the production of IEDs and stockpiling of arms should be disregarded as a non-issue are ignoring the fact that it is contained in the Ofosu-Ampofo’s leaked tape that one of the strategies by the NDC for next year’s election is the destabilization of the country.

A coup project can be started by the firing of a few weapons in a coordinated manner and informing conspirators about the H-hour or when to strike and create a semblance of chaos.

A single spark especially in a social media age can lead to destabilization and an eventual coup.

The names which have popped up are indicative of the ground work covered by the plotters and the sophistication therein.

The Carl Gustavs, Armoured cars and others will only come in when there is sufficient chaos, a senior security analyst has said to dismiss the trash being peddled that the issue at stake is a non-issue or even a ‘bentua’ affair.