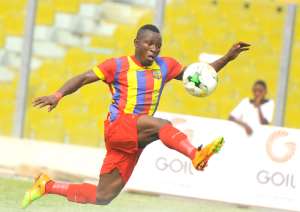 The pacey attacker was part of the 2017 squad of the Phobians that lost to Asante Kotoko in the finals of the MTN FA Cup competition that year.

At the end of the season, he earned a move away from the club and signed for Guinea top-flight side Horoya AC.

Following an uneventful spell that was marred by injuries, Patrick Razak has returned home.

Speaking to Fox FM, Nana Kumi who is close to the player has revealed that he no longer has ties with Horoya AC or any other club for that matter.

“Patrick Razak is now back in his homeland (Ghana). He was nursing an injury he suffered during his stint at Horoya AC. He has now recovered from the injury. Currently, the winger is training personally due to COVID-19.”

“Razak is a free agent now. He has no contract with the Guinean Club (Horoya AC) nor any other club”, the God-father of Patrick Razak said.

He further disclosed that Hearts of Oak has shown interest in securing the services of the former Black Stars B forward but no deal has been agreed.

“Accra Hearts of Oak showed interest in him, but nothing has been documented as at now. Any club willing to secure his signature would be welcomed.”

“Any interested club who is willing for the player can contact the Lawyer of Joy Dadi Industries (Mr. Francis), he will sit with you on it”, Nana Kumi added.