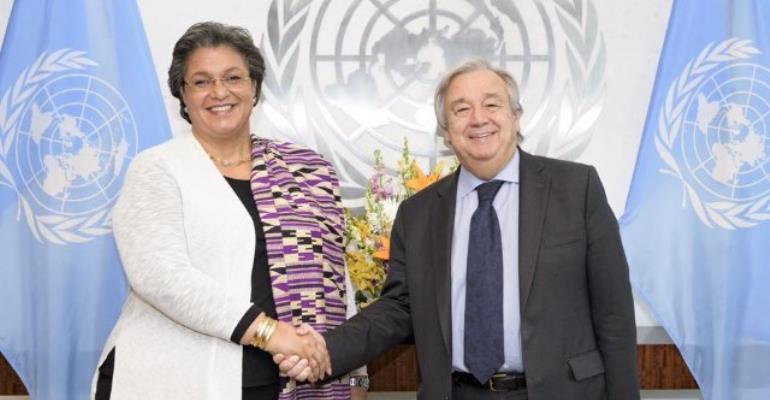 Former Ghana Foreign Minister and law maker, Hanna Serwah Tetteh, has been appointed by the UN Secretary-General, António Guterres, as his Special Representative to the African Union.

The position became vacant in October, when the previous occupant, Ms Sahle-Work Zewde, became the President of Ethiopia.

The announcement was made Monday, December 10, during a media briefing by Stephane Dujarric, the Spokesperson for the UN Secretary-General.

Ms Tetteh was appointed by the Secretary-General in July as the Director-General of the United Nations Office at Nairobi (UNON).

Ms. Tetteh brings to this position decades of experience at the national, regional and international levels, including well-honed skills in building consensus among stakeholders and knowledge of the Organization, in order to strengthen the partnership between the United Nations and the African Union in the area of peace and security.

Currently the Director-General of the United Nations Office at Nairobi, she served previously in the cabinet of the Government of Ghana as Minister for Foreign Affairs and a member of the National Security Council and the Armed Forces Council (2013-2017), as well as Minister for Trade and Industry (2009-2013).

During her term as Minister for Trade and Industry, she was also a member of the Government’s economic management team, the board of the Millennium Development Authority and the National Development Planning Commission, and was also the Chairperson of the Ghana Free Zones Board. From January to February 2009 she served as Spokesperson for President John Evans Atta Mills’ Administration transition team.

Ms. Tetteh holds a Bachelor of Laws (LLB) degree from the University of Ghana, Legon. She was called to the Ghana Bar in October 1992.