Frontrunner of the Azonto revolution and CEO of NKZ Music,Guru has replied critics of reports indicating that he spent $200,000.00 to shoot three world-class music videos in Dubai.

The ‘problem’ hitmaker who was spotted in Dubai a fourth night ago shooting three(3) world-Class videos of his upcoming songs titled ‘God is Good, Only You, and Play Man featuring Singlet and other actors’ from Dubai was confirmed by one of his management members who spoke with HotFmonlinegh.com that, the videos which were shoot in three cities in the Asian country namely Jumeirah,Deira and Safari cost $200.000.00.

Ever since Hotfmonlinegh.com reported the news, Guru has come under severe attacks by many showbiz enthusiasts who believe a Ghanaian artiste can never spend such a huge amount of money in shooting just music videos

In a facebook post,Guru who could not fathom why Ghanaian Artistes are not trusted wrote:

“Quality is not cheap…?Shooting quality and expensive matters a lot… Is about time we trust our own !! ah what’s so strange about shooting 3 music videos amassing $200.000 y’all wait cos we’re about to build schools in the deprived areas cox sometimes it’s about giving back to the society … Watch out for the world-Class videos soon! Hahahaha…? …Am proud to be a Ghanaian”.

Guru, who now wears a new hair style is set to release the three world-class videos before the end of November (2017) 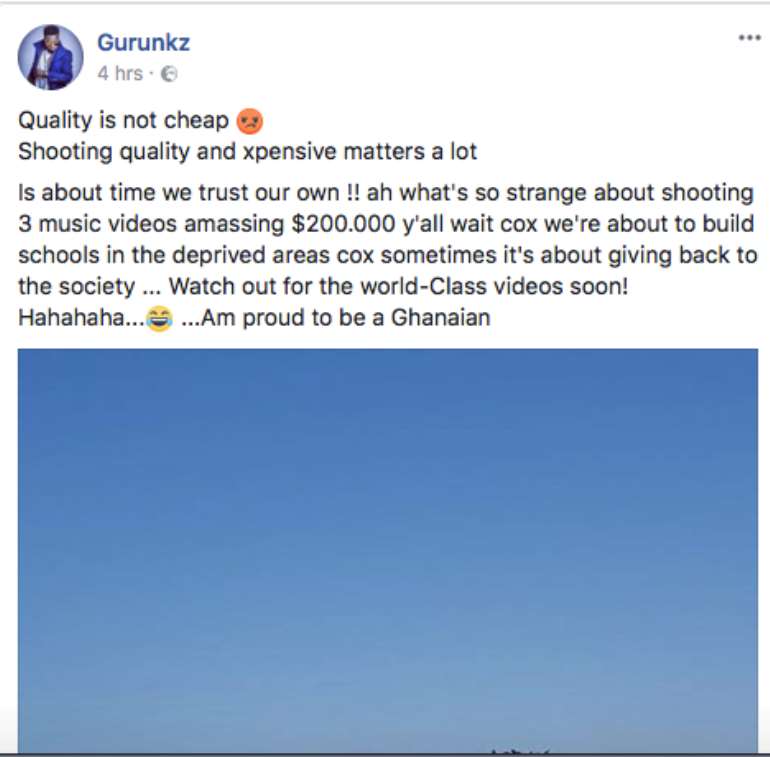