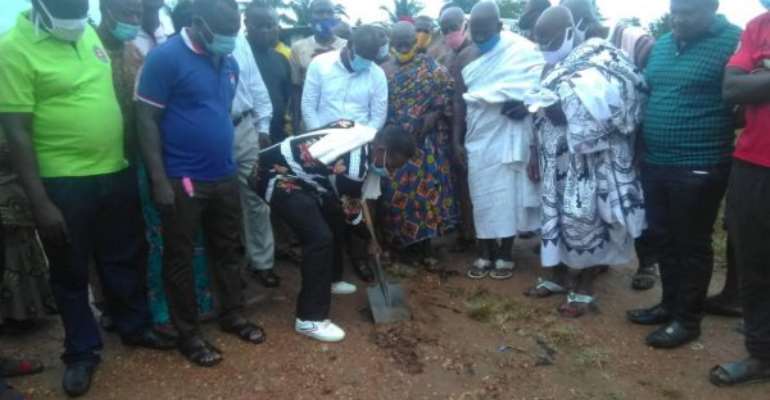 Government has awarded on contract five feeder roads to be upgraded into bitumen surface in the Agona East District of the Central Region to boost economic activities of the people.

Professor Kwesi Yankah, the Minister of State in charge of Tertiary Education, made this known when he cut the sod for the construction and tarring of roads at separate durbars at Agona Asafo and Fante Bawjiase respectively.

The Minister of State, who is also the New Patriotic Party’s (NPP) Parliamentary Candidate, said the five roads under construction totaling 50 kilometers would be completed by the end of December 2020.

He said the contractors have all moved to the sites and work is progressing steadily with the expectation that they would meet the deadline given by the government.

Prof Yankah said the roads on completion will facilitate the easy evacuation of farm produce from the hinterlands to the urban areas.

The Minister of State said plans are far advanced for the government to award the Agona Asafo town roads, which has been abandoned for years, on contract.

Prof Yankah said government is not tackling road projects alone but contractors are currently on site working to connect 55 communities in Agona East to the national grid to enhance rural businesses.

He also cut the sod for the construction of a three unit classroom block with store, office and other facilities for Agona Asafo Presbyterian Junior High School (JHS) to be completed within three months.

The Project is in fulfillment of a pledge he made after an appeal by chiefs, elders, parents and teachers to the Minister to replace the old dilapidated structure built in 1953.

Mr Dennis Armah-Frempong, District Chief Executive (DCE) for Agona East, praised Prof Yankah for the determination to improve the infrastructure in the district.

Prof Yankah’s appointment, he said, has enhanced the opportunity for Agona East to raise the living standards of the people.

The DCE called on the people in the Agona East Constituency to return the gesture by voting massively for Prof Yankah and President Akufo-Addo to enable them continue the good work.

He said the chiefs and people are ready to support government to continue the infrastructural development embarked upon in the area on health, education, roads, agriculture and others to enhance the socio-economic advancement of the area.

Nana Ponsi expressed appreciation on behalf of vegetable farmers at Agona Asafo and other communities in the district for the supply of free fertilizers by the government to boost their production.