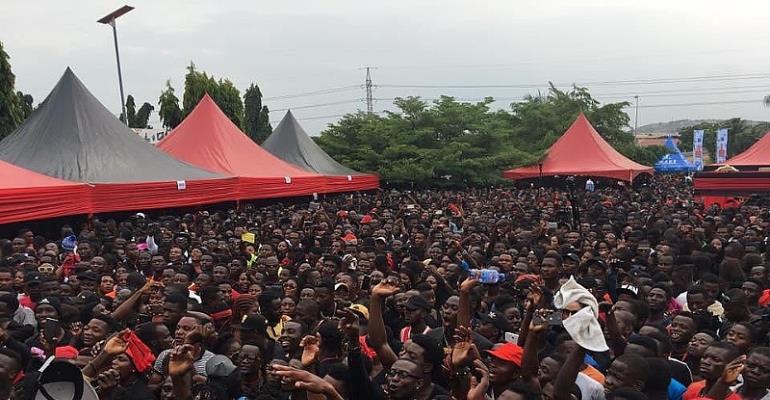 Dancehall artiste Shatta Wale was has taken a swipe at Ghanaian media as he joined family and friends of the late Ebony Reigns to mark the one week passing of the rising star.

The multiple-award winning artiste has condemned the conduct of presenters, radio personalities and other individuals in the music industry over what he said was lack of support for Ghanaian music.

When he mounted the podium for a short speech at the one-week memorial of the late Ebony Reigns held at the St. Martin De Porres School in Dansoman in the Greater Accra region on Sunday, 18 February 2018, Shatta who was featured by Ebony in the remix of her ‘Sponsor’ track condemned Ghanaians and the media for being hypocritical in excessive criticisms of the deceased yet were present at the memorial in their numbers to grief.

“Ghana, I want to ask you people one question. When will you support Ghanaian musicians? When will you people support us? When Ebony was alive the media men here, the radio presenters here, you insulted her on radio continuously now you are all here. God will punish all of you one by one.

According to him members of the public always accused Ebony of being disrespectful adding “when she dresses, you say she is exposing her breasts and private parts”.

“God, you are also here and watching the enemies. God, I want you to strike and let them see that you are alive,” he emphasised.

Shatta Wale also consoled the parents of the late songstress and asked them to count on his support.

Musicians and Ebony’s manager, Ricky Nana Agyeman popularly known as Bullet, were at the memorial.

Priscilla Opoku-Kwarteng died with two others around 11:45PM at Nyame Bekyere near Mankranso in the Ahafo Ano South District of the Ashanti Region on Thursday, February 8.

According to police report, on reaching a section of the road between Nyamebekyere and Nsuta, there was a heap of sand in the lane of Ebony’s Jeep, and her driver, in trying to avoid running into the sand, swerved onto the opposite lane and grazed the nearside portion of a VIP bus and plunged into the railings at the edge of the road, killing the music star as well as Francisca Nkansah Kuri, aged 27 years; and Lance Corporal Vondee Francis Atsu, aged 29 years.