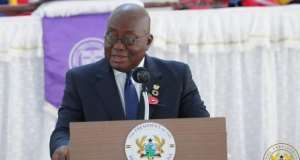 President Nana Akufo-Addo has said he will always seek the face of God in every decision he takes the head of state.

Delivering an address at a Church Service held at the Black Star Square to climax the centenary celebration of the Christ Apostolic Church International (CAC), Akufo-Addo said his rise to the office of the President of Ghana was God’s doing.

He called on the entire leadership and membership of the CAC to continually bear him in prayer for the constant supply of God’s grace to abound towards him and his government as they steer the affairs of the Republic.

“We have Men of God like Apostle Amoaning doing God’s work and helping Ghana to rise and move forward,” President Akufo-Addo stated.

The Chairman and Leader of the Christ Apostolic Church International, Apostle Dr Stephen Amoaning in his Centenary message pledged the Church’s constant support and advice to government to ensure that the Akufo Addo administration succeeds during its term in office.

The Church, as part of its 100-year anniversary, donated four state-of-the-art ambulances to the Ghana Ambulance Service to support the nation’s efforts at providing medical services to Ghanaian.