Home Sports Ghana vs Uruguay: When Gyan’s Penalty Changed My Outlook On The Game 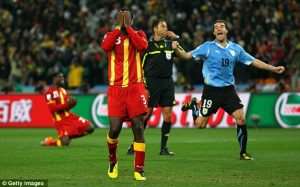 My pockets were fat, my mood even fatter.
The rain could not stop me, neither could Paul the Octopus.

Afterall it was the 2nd of July, what could go wrong?

It has been eight years, but I remember it like it was yesterday.

I quickly made plans with the guys, the topmost terrace of Citizen Kofi is where we would watch Ghana make World Cup history against Uruguay or at least so we thought.

I spent the entire day soaking up the love from family and Friends while eating my fill.

Paul the Octopus wrapping his tentacles around the Uruguay mound of food from the CNN World Sports clip, however, could not push itself to the back of my mind.

Two hours to kickoff and the rain was getting bolder but like I said we would not be deterred.

Through the grey clouds and endless red, a yellow and green blur of flags in town we made our way to Citizen Kofi.

We were n’t the only ones, lots of folks had made their way to town, Osu to be specific.

Nobody wanted to be home while the Black Stars made history.

We spent the 30 minutes before kickoff abusing the octopus.

Drinks had been ordered, finger foods secured, the mandem was hyped, and then Muntari unleashed the scorcher from distance.

I lost my mind in the ensuing ecstasy.
In the pandemonium, I had to be restrained and reminded that we were several feet above the ground.

I could barely sit through the rest of that first half.

The half time break is when the party really cranked up, f rom Yvonne Nelson to KOD the crowd had it all.

At half time we all descended to a hall on the middle floor where a mini party was already underway.

It was excitement beyond control
That halftime party left us breathless but it was also a teaser of what was to come later that night if Ghana won or perhaps how the anticlimax would feel like.

It didn’t take long to discover what the night held for us, Diego Forlan made sure of that.

The day’s events flashed before my eyes; receiving the money, octopus on CNN, the halftime party, everything.

I refused to align with the prediction of the oracle, but when Luis Suarez sacrificed himself to prevent Adiyiah’s effort from going in, the last of what was left of my confidence was waiting to be tipped over the edge

The tension in the building was so palpable we had all trooped to the ground floor to watch the extra time period.

Asamoah Gyan stepped up to the spot, I was numb all of a sudden, I could barely watch.

He looked confident as he made the run-up and then he connected with the ball, sending Muslera the wrong way, however, it bounced off the crossbar and into orbit.

I was shattered, for a few seconds I stood rooted to the spot, the crowd slowly filed out.

The stench of defeat wafted through the air.
The silence reverberated around the city
We were all too shattered to express our disappointment loudly.

Guys and girls alike were dressed for the after-party.

With hands on our waists we shook our heads and slowly made our way home, you could hear a pin drop.

This was worse than any heartbreak I had ever experienced ( at the time).

At that moment something within me snapped.
Never again did I watch the game with the same eyes and temperament.

The second of July had left its indelible mark in my life.