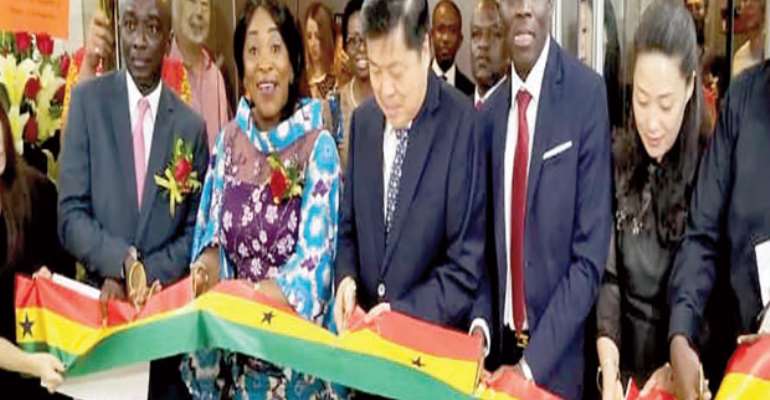 Ghana has taken its diplomatic relations with China to a higher level with the opening of a Consulate General office in the Chinese commercial city of Guangzhou.

The new consulate office in Guangzhou in the Province of Guangdong was opened to the public to provide consular services similar to the services provided by the Embassy office in Beijing.

The Guangdong Province is the economic hub of China with a population of over 106 million. According to the Minister of Foreign Affairs and Regional Integration, Shirley Ayorkor Botchway, it was only reasonable to have the office there.

“Given the scale of cooperation between China and Ghana and the fact that Guangdong Province is the economic hub of China, and as such the natural choice of Ghana’s first Consulate-General in China,” Ms Ayorkor Botchway said at the opening of the office yesterday.

The Consulate General in Guangzhou is the first of its kind to be opened in Asia and the Far East, indicating the importance Ghana attaches to its relationship with China.

With the opening of the office, Ghana joins 65 other countries with consulate in Guangzhou.

The Guangzhou Consulate-General of the Republic of Ghana, according to the Foreign Minister, has its Consular District covering the Guangdong, Fujian and Hainan Provinces and the Guangxi Zhuang Autonomous Region of China.

Ms. Botchway explained that Ghana is opening the office to support Ghanaian and Chinese businesses, to provide them with expeditious consular services and facilitate trade and investment promotion between the two countries.

“From today, the long journey these businessmen and women had to endure to go to Beijing for visas and other trade facilitation processes would be over since the Consulate-General is here to manage all these concerns,” the minister said.

“I believe this office is a good venue where business from Southern China and Ghanaian companies could meet. It is also to be used to promote a crucial agenda for foreign investments and international trade which face a fair amount of challenges,” she stressed.

The minister pointed out that China remains Ghana’s largest trade partner. She indicated that the opening of the consulate was a decisive factor to develop their relations further.

The minister said the long-time plan of the country is to have a permanent office building for the consulate.

“A year ago, that is, June 2018, when I met the Vice-Governor of Guangdong Province, Mr. Ouyanf Weimin, I requested that he assist us to acquire a land for an office building. I wish to reiterate that appeal and urge the Governor’s Office to give it a priority consideration to further deepen the cooperation and friendship between our two countries,” she indicated.

Ghana’s Ambassador to China, Edward Akwasi Boateng, said the opening of the consulate demonstrates stability in relations with China, taking the bilateral relations to a new level.

The Vice-Governor of Guangdong Province, Ouyanf Weimin, said Ghana had been a trusted friend of China.

He said the Guangdong Province was ready to roll out ready carpet for Ghana to attract more investments and businesses.

He also pointed out the medical collaboration between the two countries citing the LEKMA Hospital where Chinese specialists had been deployed to provide healthcare.

The Consul General, Samuel Yaw Nsiah, expressed joy about the new office, asking Ghanaians in his area of jurisdiction to cooperate with them.