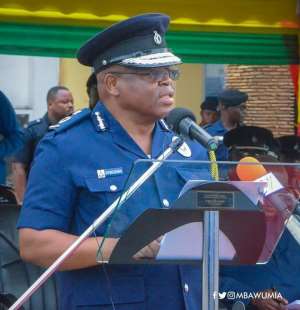 The Acting IGP, James Oppong Boanuh comments following the announcement of the DNA test which confirms the four missing Takoradi girls are dead.

Below is the entire transcript of the IGP:

The officers of the Ghana Police Service informed four families in Takoradi in the Western region that the DNA test conducted on samples discovered in the course of police investigations into the disappearance of four missing girls have turned positive as the remains of the girls.

The GPS has with regret, therefore, informed the families that the remains are those of Ruth Abakah, Priscilla Blessing Bentum, Ruth Love Quayson and Priscilla Koranchie.

The investigations now establish that the girls were victims of kidnapping and murdering syndicate that operated in the Takoradi area. While for various reasons we were unsuccessful in obtaining and acting on accurate actionable intelligence in good time to enable us to rescue the girls, we believe that the arrest of the culprits has effectively thwarted the ability of this syndicate to have continued with further kidnappings and murders.

On December 22, the police were able to track the number though which some ransom had been paid, which led to the arrest of Samuel Udotek Wills to assist with investigations. Mr Wills later escape from custody on December 30, 2018, but was rearrested three days later in an uncompleted building at Nkroful, a suburb of Takoradi.

He has been convicted from escaping from lawful custody, and he was brought to the headquarters of the Criminal Investigations Department of the Police Service where upon interrogations he admitted that he together with suspects John Orji and John Shika kidnapped the young girls and sent them by road to a location in Nigeria known as ‘Baby factory’ in Anambra State. He, however, denied the knowledge of the whereabouts of Ruth Abaka.

The evaluation of this confession and other intelligence from Nigeria on the location and modus operandi of this ‘Baby factory’ culminated in an assessment by the investigative team at this stage that they had a fair idea of the location of the girls and it will be possible to bring them home.

Between April and July 2019, several surveillance operations were mounted in Onitsha, Orca, Port Harcourt and Calabar all in Nigeria. These were locations where suspects Samuel Udotek Wills mentioned at different times as places where the girls were sent and directed investigative teams with the hope of tracing and rescuing the girls.

Upon collaborations with other intelligence and investigative agents across West Africa, the second suspect John Orji was tracked and arrested at the Aflao border on June 4, 2019. During interrogations, Orji admitted knowing Udotek Wills but denied any knowledge of kidnapping. He claimed that he had met Udotek Wills to collect some monies owed him after Udotek Wills had sent him to Tamale to bring him a money ritual box.

The two suspects were put together for questioning and while Udotek Wills said he did not know where the girls where John maintained his denial of any involvement in the kidnapping of the girls. Two officials from the Nigeria National Agency for the Protection of Trafficked Persons, came to Ghana on June 17, 2019, to assist the police in their investigations. They interrogated both Samuel and Orji at the Police Headquarters, which did not yield any actionable information.

Efforts to also locate the girls in Nigeria did not yield any result by July 31, 2019. The Nigerian leads were unreliable and unreliable as at that date. On August 2, 2019, the investigations team was informed by the National Agency for the Protection of Trafficked Persons that a third suspect, Chika Nnouedem had been arrested in Abuja. In a video interrogation of the suspect, Udotek Wills identified Chika to the police as one of the accomplices.

Chika also apparently knowing Udotek Wills willing spoke with him with regards to the missing girls and in the process, Udotek Wills asked him about the girls. In a confrontational exchange between the two, Udotek Wills insisted that it was Chika and another person, Mama Soboma, had taken the girls to Nigeria.