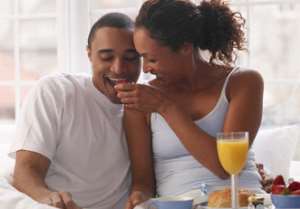 “My love is an unchanging love. It wouldn’t fade away. I will guide it with much care. I will nurture it with patience, humility and giving. The fear of God will be central in our daily affairs. Our children will know their Creator and faithfulness will never leave us. We pledge to each other to be committed to this love till death do us apart. So help us God,” Nhyira said to Adepa as the crowd cheered them on their Holy Matrimony.

The two, had been through a lot to come this far. They had fought and maintained a childhood friendship to be marriage today.

It’s all began one day in class. A teacher had come to teach. As the teacher started his lesson, Nhyira was looking for his pen. His pen had been stolen. He asked his colleague, Aba if she had seen his pen. The teacher called him and gave him strong ten canes for disturbing in his class. He tried to explain himself to the teacher but he objected to his explanation and went ahead to cane him. This incidence caused Adepa to console Nhyira as he wept aloud like an aticulator climbing a hill. His weeping was so loud that, it drew the attention of the headmaster to issue a query letter to the teacher who caned him.

Nhyira was sorrowful the whole day. Adepa helped him eat. She consoled him and sacrificed to even write his homework for him that day. He could not speak the whole day to the new found friend who has now become the woman of his life.

He went home sad but remembered something the friend placed in his bag before they closed for the day. He went into his bag to look for it. When he opened his bag, he saw a beautiful handwriting on a piece of coloured white paper addressed to him.

On it is inscribed,

Words can’t explain my pains as Sir was caning you. I felt same. It was as if I was the one receiving those canes.

You could have runned away as Adjoa did last time but you stood on your toes and received canes for an offence you did not commit.

It was a sad day for me, also. I want to assure you that, I will always be there next time your pen is stolen. I will give you one. Even if I do not have a spare one to give, I will give you my own or ask for one for you.

I am truly sorry for your pain through out the day. Cheer up and remember even Jesus Christ was hanged for a sin he knew nothing about.

Nhyira please, do not forget to do your homework. Please, be good and take care of yourself.

Nhyira immediately became happier and went for his homework book. He admired the handwriting of Adepa. He did his homework and rushed to the kitchen to help the mother to cook supper.

He rushed to Adepa’s house only to know that, she was not feeling well and had not eaten for the whole day. It was his time to be kind to her friend. He went home to take permission from his mother to take care of his beloved friend who risked her life for him the previous day. The mother granted his request. He thanked her, went into his room to change and went to his friend’s house. He stayed with her till evening.

When Adepa came to school the following day, Adepa and her friend, Nhyira were seen doing things together.

They started learning, eating and learning God’s word together. They were nicknamed, “Best couples” on campus.

Since their friendship was real, they went to the same Senior High and the same University.

They were faithful to each other. They were good friends till finally on their day of graduation at the University, their colleagues asked them, “when will we be attending your wedding?”

Jovially, Nhyira and Adepa responded, “next four years instantly.” Their friends and everyone standing by, started clapping for them.

The two friends began to thank their friends for the honour.

The two quickly agreed on a date that evening. They agreed to marry as planned but have to keep praying about it.

Nhyira and Adepa finally fixed the wedding date after settling down. They were all working.

At their wedding, after their vows, they both looked into each others eyes and said to each other, “I will never forget you.”