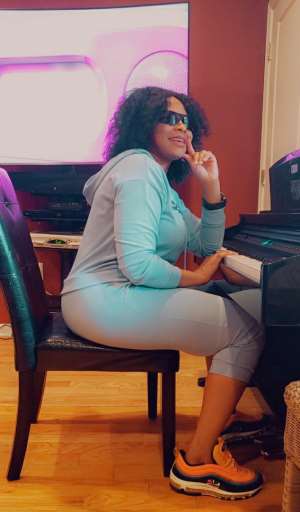 To every person there is a calling; whether to become a prophet, president, doctor, philanthropist, teacher etc. it is a call first to God, then humanity. It has been seen or heard thereof all around the globe admonishing people to find their purpose in life.

Finding one’s purpose in life distinguishes him from others, front lining his uniqueness above that of others. People in uniform with a typical example as that of health workers depicts more. Some nurses run off their duties out of fear or hearsays, but others, no matter the risk, will go all out to save people staying true to their calling.

It may not be a voice heard, or being prophesied to, but the moment one has an intense passion for a particular thing, it can be termed as a calling. Irrespective of educational background, a person can still come back to do the very thing he enjoys even if it comes with a lesser income.

It is of this call that we came into contact with music, secular or gospel, or both. Music in my definition is the food for the soul; the reason why our hearts have beats. Music has come to relieve souls of grief and pain, taken people out of fear and given hope. It has given others the reason to live and the strength to pursue greater heights.

As such God in His magnificent wisdom, as He resides in His praise, has apportioned to some persons gifts to carry out the purpose of music. Music when not given from above is only but noise bringing no soothe at all.

Music that soothes the soul and brings comfort, to me, will be that of gospel music. Most of its inspirations from the bible renews the mind and accompanies the soul into the Lord’s presence.

A lot of gospel artistes have come to pave the way, others have followed, more are rising and the rest yet to be born. The good news is; the name of the Lord still resounds but the moment the pride of Satan reveals itself, then, there begins, strife, hatred, backbiting, belittling and self-centeredness. It would be appropriate, therefore, to always have a prayer request on that of pride as an artist.

Out of pride some gospel artistes determine who they want to share the same stage with. Often at times we hear them say, “if this person is on the bill I’m not performing, I have the biggest hit now, as such I’m to vibe or associate with this category of people, I am best as sampling music to make them hits and I’m also he who can put together words of my own to create my own hit songs” and so forth.

If care is left aloof and the ‘I’s are spewed at interviews; it goes along to step on the toes of others. This generates lots of misunderstandings which when damage control goes wrong, creates bad blood among artists. As Christians and gospel musicians at most, we have the world expecting us to be perfect which no one is but the least we can, let’s make it happen.

This brings me down to the Patience Nyarko and Joe Mettle fracas. It may come out as pride as others may think, but to others she’s done what Napoleon couldn’t do. Opinions they say are like noses, everyone has it. To those who believe it’s pride or jealousy, they aren’t mistaken. They are watching it from the point of view of the heights Joe has attained.

He sings well, he’s won artiste of the year, had many collaborations with international artistes, performed on bigger stages and recognized in some other countries. This he gained through hard work and perseverance and no one can take that from him. These achievements are better off than most Ghanaian gospel artistes and certainly being human, some artistes will feel threatened.

But this is the Joe Mettle’s generation. His brand is contemporary and as such has a connection to the youth who generally makes things hyper than hype. As long as their favorite keeps them up, he is on top and will get their support accordingly with whatever produced whether sampled or not.

But let’s take a different swipe at this. Others believe she has said or done what Napoleon couldn’t do. As much as people think it is out of jealousy, she has equally spit out the fear of many other artists. This generation, as hyper as they are, accept anything in a beautiful package even if it has nothing as content.

In other words, she could be saying, look around, there are equally great artists out there who have been left to rot because they are not the Joe Mettle’s. They have been brushed off leaving just one as brightest. Meanwhile just an artist cannot make an industry.

There could be some truth in there that, some particular people determine who makes or not. They even go to the extreme of paying DJs to refuse to play of some gospel songs. But the truth is this, when you know Who has called you, your fight on your knees will never go waste.

Coming up, you need to note who to target; older generation or the youth and brand yourself as such. Equally know who you associate with. Human beings will always be human; as others seek your wellbeing, others just want to milk and walk away. Be vigilant and pray for discernment into people as such. Learn how to fire incompetent managers and desist from media men who have no influence.

For the known artistes’ who blame others for their woes, they should kindly ask themselves these questions; how did they get their last hit, what has changed, how complacent have they become? Or a break after making money gives them an instant hit when they bounce back? Always live with the notion that the key to your success is in your hands.

The problem shouldn’t be centered around Joe or Patience, but in general. Ghanaian gospel artistes both in the known or upcoming are said to be lazy, unimaginative and uninspired. Every genuine singer is supposed to get inspiration from the bible and nature. With 1,189 chapters in the bible, a chapter could be used to at least create a song. This also means a genuine musician should be able to create over a 1000 songs based on the bible in his lifetime. Exclusive what is gotten from nature like pain or joy.

Luckily, laziness is not Christian, packaging and sampling old songs for sale is a sin, no offense to no one; nevertheless, it helps save lives. Gospel musicians are equally seen as warriors, they are to practically and constantly set aside for themselves times to pray, read the bible and seek the Lord’s face for songs.

Sampling songs keep an artist awhile but not permanent, therefore it shouldn’t be seen as a key to be in the limelight. Those who usually stay long in the system are mostly those who churn out their own tunes. It is therefore imperative, not to rely on your stardom and rearrange old tunes for sale.

The hating and judging of other artistes on behalf of God should stop. He is even wondering who sent you. Live your life free of hate, let love through your heart and mind. Pursue kindness and let’s join hands in unity as we seek the Kingdom of God first before any other. Many have lost themselves to material things but I pray, your life signifies the glory of God. May God help us all.