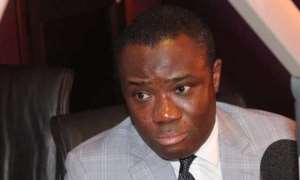 The Parliamentary Candidate for the National Democratic Congress(NDC) in the Abura Asebu Kwamankese Constituency, Felix Kwakye Ofosu has asked the right-thinking public to ignore the alleged infidel video making the rounds on social media.

This follows a video of the former Deputy Information Minister under erstwhile Mahama administration allegedly caught at the residence of a lady.

The man who recorded the video is heard saying the lady and his brother who is domiciled abroad have made arrangements to marry but Felix Kwakye has been sneaking in at odd hours to meet the lady in his brother’s room.

In his response copied to ModernGhana Web over the alleged video, Felix Kwakye said the matter happened in 2019 during the parliamentary primaries of the opposition NDC.

According to him, he procured items meant for the primaries such as hospitals beds and some 1,200 pieces of cloths.

He noted that due to lack of space at his house, the lady agreed for him to keep the items at her place.

Felix Kwakye added that he only went to the ladies’ house to pick the items he had kept with her only to find two ladies and a guy in the house accusing him of having an amorous relationship with the lady who is not married.

I kept the items for my primaries at the ladies’ house.

Some hospitals beds and 1,200 pieces of cloths. I didn’t have space at my place.

I had gone for it at dawn on my way to the Constituency and two women came there with a guy saying I had something to do with the lady.

I had absolutely nothing to do with her.