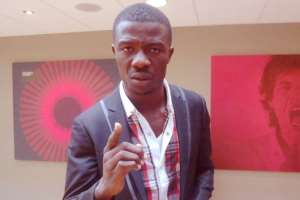 Meanwhile, in an interview on “Konkonsa De33” a segment on “Gyaso Gyaso” with Atesem Hemaa Akua Afumwaa on Bryt99.1Fm, Kwaku Manu said, Addai had rather used his wife for sacrifice to obtain spiritual powers to control people, not the other way round.

“I’m not surprised some people are following that “foolish” Addai because he has been using powers to control them”, Kwaku Manu stressed.

He also alleged that, Evangelist Addai has made his wife halfwit and therefore wonder how such a person can point accusing fingers on him.

When asked if he was not afraid of Evangelist Addai, Bob Ziga replied saying, ” How, I’m not afraid of Addai, he can’t do anything to me because his powers are only limited to his wife that he has made her halfwit.”