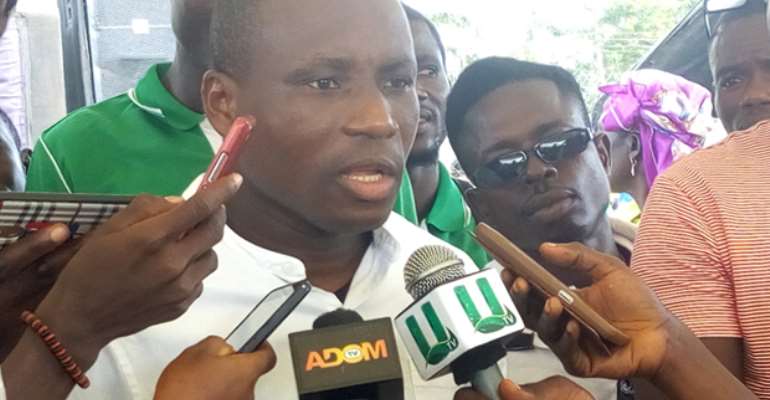 A group of angry Assembly Members in the Ellembelle District Assembly of the Western Region have accused the District Chief Executive (DCE), Mr. Kwasi Bonzoh over mismanagement of the Assembly.

The 24 concerned Assembly Members disclosed this to the media after boycotting the formation of sub-Committees of the Assembly at Nkroful on Wednesday.

According to them, they were not informed about the addition of the Agric Committee to the existing Committees.

They added that the DCE deliberately picked majority of them (Concerned Assembly Members) to be part of the newly formed Agric Committee of which according to them, do not have knowledge in that field.

Speaking exclusively to this reporter at the forecourt of Ellembelle District Assembly Administration block, the Assembly Member of Mantukwa Electoral Area, Hon. Samuel Dzivenu disclosed why they boycotted the meeting.

“They said have included Agric, Mines and Environment committee which is not part of the statutory committee we have as some of us came today said it’s illegal and against the law as the District Assembly have to call on the new Assembly members tell us the kind of committee have included”, he added.

He said during the meeting, they proposed to the Assembly to add Oil and Gas Committee to the existing Committees since the District is blessed with oil and gas industry but their proposal was ruled out.

“All those things didn’t happen and all they have done is giving us letter to inform us the kind of committee we are added to. But per the Act and standing orders tell us that after forming a committee, they have to call general Assembly meeting for the members to agree and accept wholeheartedly before joining a committee”, he worried.

Hon. Samuel Dzivenu lamented over the inability of the Assembly to get a Presiding Member (PM).

“We all want betterment of Ellembelle so we didn’t go to court. Till now they didn’t call meeting for election of Presiding Member again. The problem is that because we don’t have Presiding Member, we are not aware of any activities going on in the Assembly.”

He, therefore, accused the DCE of doing everything in the Assembly without consulting them.

“DCE does everything. We wish to help the DCE to succeed in his project and programs but we have been elected for about ten to eleven months now, we are there, every decision been taken in the Assembly is done by the DCE alone whether Executive, Legislative or deliberative decision, he does everything on his own”, he claimed.

He suspected the DCE was misappropriating the resources of the Assembly hence his unwillingness to call for another general meeting to elect a Presiding Member.

He stated that if the DCE doesn’t change his style of leadership, they would pass vote of no confidence in him.

“Unit committee members have collapsed, Area Council is not functioning because unit committee members elected for almost a year now are all at home. They have not been sworn in because we don’t have Presiding Member. DCE didn’t address all these things, area council won’t work”, he claimed.

He, therefore, took the opportunity, to appeal to the Paramount Chief of Eastern Nzema Traditional Council, Awulae Amihere Kpanyinli III to support the Assembly to get a Presiding Member.

The District Chief Executive, Mr. Kwasi Bonzoh in a telephone conversation rubbished their claims and described them as NDC members who had been influenced by his main contender just to sabotage him.

He also rubbished the claims that he was the one behind the inability of the Assembly to get a new Presiding Member.

“How on this earth will I Bonzoh be working against the election of Presiding Member, we have met for three times and they [Assembly Members] rejected their own so why are they blaming now”, he said.

He continued, “.. let me tell you these so called 24 concerned Assembly Members are all NDC members, they are being influenced to disturb me but I am focused, they are doing politcs, even among them that they are saying they don’t like the Agric Committee, ask them, the Assembly Member of Kikam Electoral Area, Hon. Paul Kodwo Kwaw was adjudged the best farmer in the 2017 Farmer’s Day in Ellembelle District so what are they talking about, I will call you later because I am a car traveling.”