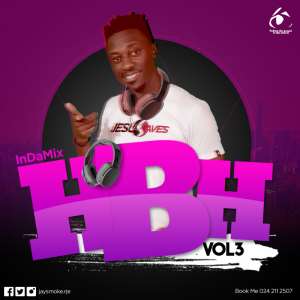 In this year’s edition, we are blessed with music from seasoned artists such as KB, Bizzle, Sevin, Skrip, Guvna B, Swoope and also introducing many new acts such as Jered Sanders, Limoblaze, Maikon West, King Subzy, El Melo and many more. With as many as 40 songs on the album, with a listening time longer than a football match, every Hip-Hop lover will definitely find something favourable on it.

Dropping this new mix for y’all, I hope you enjoy it and it blesses you in more ways than one. The whole idea behind this compilation is to sort of introduce you to musicians who are sold out for Jesus and using your favourite genre, Hip-Hop to spread the good news. By so doing, you can follow them online and then begin to get more of their songs so that you don’t have to listen to songs that compromise your belief, says DJ JaySmoke.

Heavy Bass Hip-Hop Vol 3 is a banger and our advice to you is to turn the volume uuuup and the bass to extreme but be warned, if you have a weak speaker, it could blow up. Enjoy, Share, Be blessed.

Special thanks to God for this opportunity once again. To you, for all the support you have given me. To TeamRJE. To Mr Anderson (CEO, GFMM) for the console I use to create this mix. And to everyone who has supported me one way or another.