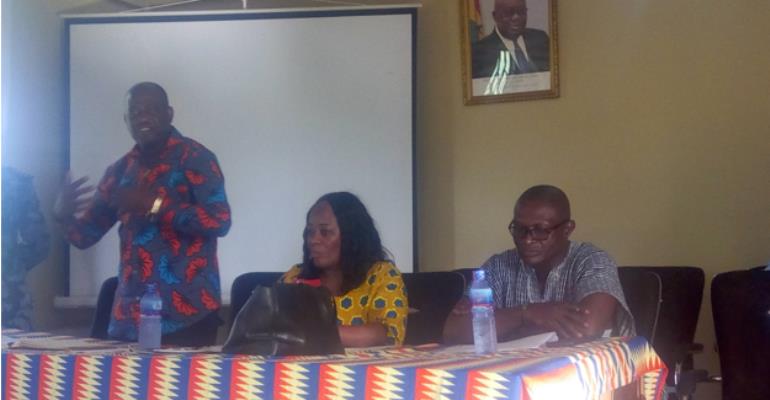 Mr. Augustine Collins Ntim, Deputy Local Government Minister in charge of Rural Development and Agriculture has visited Tain District Assembly to interact with the various Departmental Heads and the entire workers of the Assembly as part of his tour in the Brong Ahafo region.

The purpose of the visit was to find out what is been done at the District level to help achieve president Nana Addo Dankwa Akufo Addo vision, policies, programmes and special initiatives at the district and to also discuss critical issues pertaining to the Assembly in carrying out its mandate.

Madam Charity Akua Oforiwaa Dwommoh, the District Chief Executive in her address enumerated a number of success the Assembly has chocked under her administration which include the completion of the District Assembly Administration block, Drafted Sanitation bye-laws which would soon be put before the General Assembly for approval after which it would be gazetted, improvement of the 2017 Basic Education Certificate Examination results in the District and fumigation exercise carried out at District Health Centre to control bedbugs.

The DCE said about 20.000 cashew seedlings has been planted to be distributed equitably to farmers in the district under the Planting for Export and Rural Development program (PERD).

She added that the District has also institute the District Chamber of Agriculture Commerce and Technology (DCACT) to encourage the Youth into farming and to also develop the youth in agriculture which three proposals has already been sent to Accra for support in Cassava processing, cashew nursery and cashew production.

The DCE assured the Deputy Minister that all hand is on deck and the Assembly is working towards the achievement of the Visions and aspiration of His Excellency the president of the Republic.

Mr. Collins Ntim said government is in hurry to deliver on its promises and that all the challenges facing the various Assemblies to help deliver on its mandates would be addressed.

He therefore advised the workers to be punctual and avoid lateness to work.