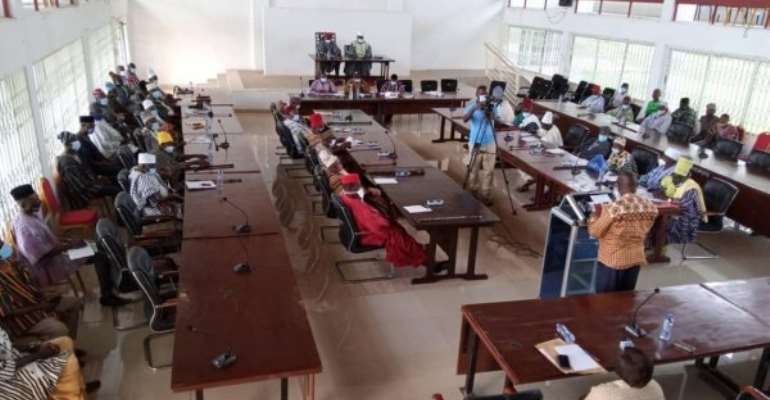 Naa Dikomwine Domalae, Paramount Chief of the Daffiamah Traditional Area, has been elected unopposed as the new President of the Upper West Regional House of Chiefs.

Naa Domalae, who was the Vice President of the House until his election would take over from Kuoro Richard Babini Kanton VI, the Paramount Chief of the Tumu Traditional Area.

Also, Naa Puowele Karbo III, the Paramount Chief of the Lawra Traditional Area, was elected unopposed to serve as the Vice President of the Regional House of Chiefs.

Five members of the House including the current President and the Vice President-elect were elected to represent the Upper West Region at the National House of Chiefs.

In all, 22 out of the 32 delegates took part in the election.

Earlier in his address, Kuoro Kanton lauded his predecessors for establishing a less stressful convention through consensus building, which according to him held the house together and eliminated the acrimonies that went with competitive elections.

He pleaded with the House and stakeholders to extend the courtesies accorded him during his tenure to the incoming leadership to ensure progressive conduct of business in the House.

Kuoro Kanton reiterated the need for chiefs to collaborate with others in neighbouring Traditional Areas to minimize misunderstandings relating to ownership of communities and land boundaries to accelerate peaceful development.

“It is imperative to close ranks to ensure that we live together in peace, harmony and united in diversity to promote the dignity of the chieftaincy institution,” he stressed.

“I will admonish that we continue to serve as the embodiment of culture, traditions and customs and use our positions to galvanize the population for communal service and to maintain peace for national development,” he emphasized.