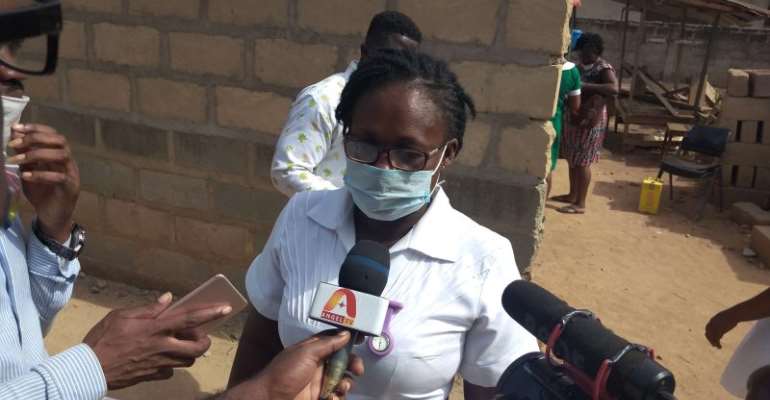 A United Kingdom (UK) based Ghanaian lady, 38, has been quarantined by the Weija-Gbawe Municipal Hospital (Annex) on suspicion of the deadly Coronavirus.

Deputy Director of Nursing Services at the hospital, Madam Cynthia Lamptey, disclosed this to Journalists on Monday, March 16, 2020 when the Parliamentary candidate of the National Democratic Congress (NDC), Cleland Ayaa Ayison, went to the hospital to donate hand sanitizers and tissues as part of awareness creation on the deadly pandemic.

She said the suspected victim, reported to the facility this morning with symptoms of the deadly disease.

She added that the victim returned to the country from the United Kingdom (UK) on March 6, but reported to the hospital this Monday, March 16, 2020 and complained of having difficulties in breathing, experiencing sore throat among other ailments suspected to be symptoms of COVID-19.

“She reported this morning and per the signs and symptoms exhibited, we quarantined her. We haven’t tested her, at our level, we can’t test her, we are supposed to call our district, we just called our district director, we are waiting for the director, she said she is coming. After that, we’ll make arrangements for Noguchi. We are also making arrangements for proper quarantine. She is a Ghanaian. She reported this morning with sore throat, with a fever of about a 40-degree celsius, she is coughing and feeling cold. She arrived from UK on the 6th of March,” she stated.

The victim has thus been quarantined since morning awaiting further directives and transfer to the Noghuchi Memoral Research Centre for further test.