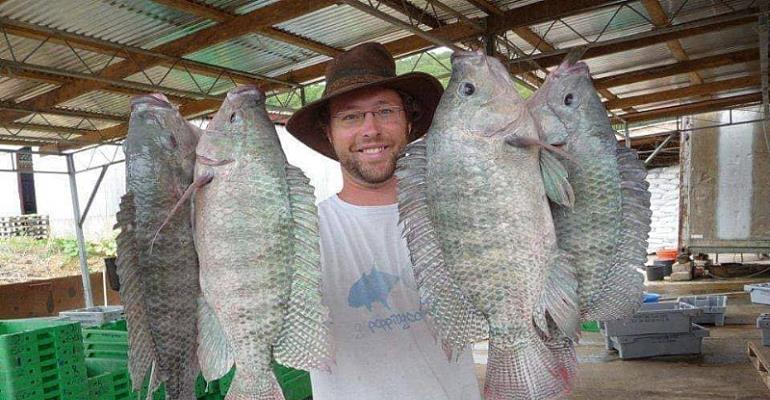 Tilapia dealers at Akosombo and surrounding communities have raised concerns over the low patronage of locally produced Tilapia due to the influx of chinese ones which have dominated the Ghanaian market in recent times.

The fish farmers disclosed this to journalists following government’s announcement of a ban on the importation of Tilapia into the country after the outbreak of a Tilapia virus in the country.

In an interview, the farm manager at West African fish Ltd. Marc Towers, said Tilapia produced locally attracted local businesses as well as foreign investors but it’s patronage has reduced considerably in recent times due to the invasion of imported frozen Chinese Tilapia products into the Ghanaian market. He said” when we started eight years ago, it was an attractive business environment for investors, many of them craving to do business on the Volta lake but more recently illegally imported Tilapia products are competing with the locally produced ones.

According to him, consumers prefer to buy the Chinese Tilapia products which have questionable quality as compared to the freshly produced ones from the Volta lake due to low prices even though it’s quality and safety cannot be guaranteed.

Mr. Towers indicated that prices of Tilapia produced locally are usually higher than the imported ones due to high cost of production. According to him, some challenges facing the fishing sector such as high cost of Electricity for breeding strains, high cost of fish feed and other expenses contribute to the higher prices of locally produced Tilapia.

He also mentioned that Tilapia farmers have reduced production as a result of a sharp decline in the confidence level of consumers in purchasing Tilapia despite been permitted by government to produce about 8,000 tonnes per annum. “We were permitted by government to produce about eight thousand tonnes per annum. We were doing about two thousand sometime back but now producing under thousand because we cannot sell in the local market because many consumers have lost confidence in buying Tilapia.”he added.

When asked if fish farmers have received assistance from government and other stakeholders, they responded in the negative and said government failed to honour it’s promise of tax exemptions on fish feed.”we do not get this exemptions, it has rather been increased.” He noted.

He therefore appealed to government particularly the ministry of fisheries and Aquaculture and all stakeholders to have a clear policy direction towards implementing it’s policies and guidelines in order to ensure that local Tilapia farmers are protected against importers of frozen Tilapia products to enable them to continuously produce quality and affordable fish in the market.

Some of the Tilapia sellers interviewed at the Asikuma market also expressed worry at the rate at which the Chinese and imported frozen fish are patronised by unsuspecting consumers, they also appealed to the government to take stringent measures to prevent the Chinese and other nationals from engaging in acts that have the tendency to affect their business.