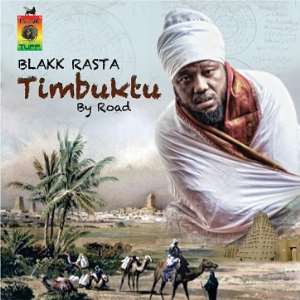 Ghana’s Number one Reggae Music Radio Presenter and internationally-recognised Reggae musician, Blakk Rasta has successfully launched his Timbuktu By Road album to a cross-section of the Ghanaian media.

The exclusive Media Album listening and Launch took place at the Alisa Hotel on September 2,2019 with so many media personnel and other important dignitaries in attendance.

Without any doubt,Blakk Rasta proved that he is a great songwriter and a complete musician when he took the audience present through all the songs on the Timbuktu By Road album.

It must be emphasized that Blakk Rasta had to trim down the album to 32 songs after an initial 50 songs recorded .

The 32 songs on the Timbuktu By Road album are divided into two parts; The Kuchoko and The Kuchoko Dance with each having 16 songs.

For The Best Pizza In Town And Much More ,Check out Gennex Pizza Restaurant & Grill

The album can boast of various forms of music from different parts of the world as well as a fusion of local Ghanaian languages as well as English which to a greater extent proves how talented and deep Blakk Rasta is.

Showbizpunchgh.com can also attest to the fact that the album pays homage to certain important personalities in the world as well as tells stories about the realities of life. Indeed the Timbuktu by Road album is an album every music lover should have because its an album with so many classic compositions: an album hopeful of grabbing a Grammy.

The MC of the event was Daddy Bosco who was in total control of the night with his vocal delivery and interaction with the audience.

Blakk Rasta was also at its best with explanation of each song and what inspired it. Apart from album listening, media personnel present had enough time to pose some questions to Blakk Rasta.

Some of the songs on the album include Dumb Trump,Robert Mugambe, Adjanka Ba, Dede,Emefa,Kofi Annam Says, Racists in Uniform, Tears Keep Falling ft.Ted I and Bye Bye Kimono.