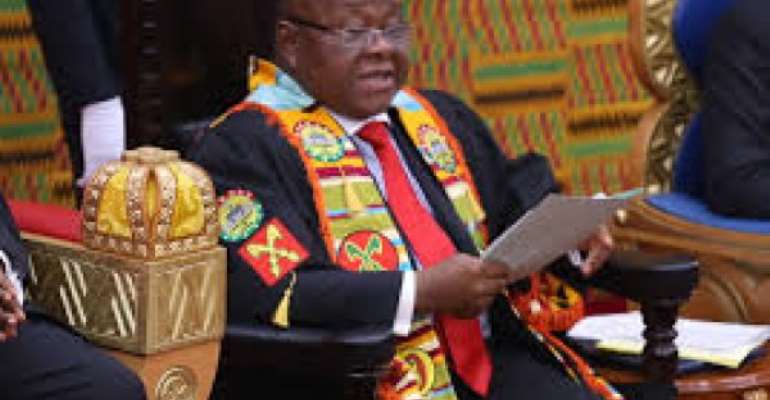 Speaker of Parliament, Professor Aaron Mike Oquaye, has informed the House of a letter from the Auditor General explaining why it delayed in submitting the report on the Audited Accounts of Government and the various Ministries, Departments and Agencies (MDAs).

“I have received a letter from the Auditor General which I refer appropriately to the two leaders, which refers to certain delays in audited accounts to Parliament, which has been a subject of some comments,” he said.

“It states in clear terms that the delays were not deliberate in anyway or whatsoever. With the arrival of the COVID-19 several institutions including their office was adversely affected as known to the public and that the office will continue to fulfil its constitutional duties.”

The Speaker said copies of the letter had been made available to the Majority and Minority Leadership accordingly and urged the House to take note.

The House resumed sitting from recess on Tuesday, October 6, and is to sit for the next five weeks before it goes on recess again to engage in electioneering prior to the December 7 polls.

During the vacation the Minority National Democratic Congress (NDC) Caucus regrouped at the Parliament House and organised a press conference during which it called on the Acting Auditor General to, as a matter of urgency, submit to Parliament the Audited Accounts of the Government for the 2019 Financial Year.

It also called on the Auditor General to publish the Reports as demanded by the 1992 Constitution.

“The Minority is particularly concerned that these delays may be deliberate for the primary purpose of avoiding further embarrassment to the Government,” the Minority said at the conference.

It asked if the “delays are not intended to cover up malfeasance on the part of Government because this year is an election year.”

The Minority, led by the Leader and MP for Tamale South, Mr Haruna Iddrisu, drew the attention of the Government to the constitutional requirement of the Auditor-General and the Audit Service to audit and submit to Parliament Reports on the Audited Accounts of Ghana for the preceding year within six months after the end of a preceding year.

He quoted Article 187 (5) of the 1992 Constitution, which said: “The Auditor General shall within six months after the end of the immediate preceding year to which the accounts mentioned in clause (2) of this article relates, submit his report to Parliament and shall, in that report, draw the attention to any irregularities in the accounts audited and to any other matter, which in his opinion ought to be brought to the notice of Parliament.”

He further referred to Section 20 of the Audit Service Act, 200 (Act 586) which provides that: ”The Auditor –General shall, within six months after the end of the immediately preceding financial year to which each of the accounts mentioned in this Part relates, submit his report to Parliament and shall, in the report, draw attention to any irregularities in the accounts audited and to any other matter which in his opinion ought to be brought to the notice of Parliament.”

Mr Iddrisu said notwithstanding the above provisions of the Constitution and Act 586, the Auditor-General has failed to submit and publish his Reports, three months to the end of the financial year.