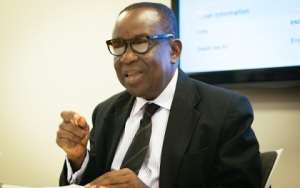 Alhassan Salifu Bawa, the author of an opinion piece suspected to have caused the detention of some staff of online news portal, Modernghana.com has dared the National Security to arrest him instead.

Laptops belonging to the online media outfit were also seized in the course of the raid.

But Alhassan Salifu Bawa who’s a Lecturer at the University of Education, Winneba, (UEW) and said to be an ally of Vice-Chancellor of UEW, Rev. Father Prof. Afful Broni in an interview with Starr News said the National Security should rather come after him as he’ll provide evidence of his allegation against the National Security Minister Albert Kan-Dapaah and Member of Parliament for Efuutu, Alexander Afenyo-Markin.

“The editors what role did they play in the articles that allegedly they’ve been picked up for. Because I’m the author of that article and so they should pick me up. I’m the one they are supposed to pick up so why do they live the head and go for the tail if they believe they are doing the right thing.

“I don’t like talking about the National Security Minister because I don’t have any problem with him. But the truth must be told at all times, this same National Security Minister wrote a letter or a report dated 3rd May that made it clear that Afenyo-Markin is the brain behind the University of Education, Winneba, it is on record. Then this same Minister just a month after is saying that I’m the one responsible for the disturbances. I’m appealing to the President to set up an impartial committee to look into the problems of the UEW and come out with a report,” Alhassan Salifu Bawa added.