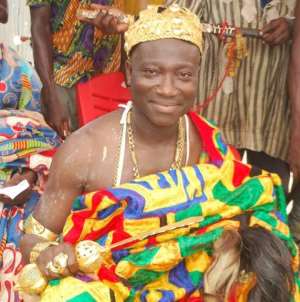 The Paramount Chief of Aowin Traditional Area in the Western North Region has denied his involvement in the recent flogging of a young man at his palace.

Beyeeman Tano Kwaw Benbuin III said though the incident took place in his palace at Enchi, he was not in the town on the day of the incident.

According to Beyeeman Benbuin, the incident is being hyped as an orchestration by his detractors, including his chieftaincy rivals and some police officers at Enchi, the traditional headquarters, to only give him a bad name, because of his resolve to stop illegal mining activities ongoing on in the area, which is a source of income for his detractors.

Speaking to journalists in response to the myriad of allegations seeking to implicate him as a party to the flogging incident, Beyeeman Kwaw Benbuin III said those making the allegations must check their facts again.

According to the Aowin Omanhene, he was away in the Brong Ahafo Region on the day of the incident and therefore could not have taken part in that exercise.

He described those making the allegations as people with ill motives and who are looking for non-existent allegations to only tarnish his reputation.

He underscored the reasons for the making of such allegations. which he said, were due to the fact that, he has taken certain tough decisions that have gone against some persons in the town of Enchi, including some persons in high places.

Explaining why the flogging incident occurred, Beyeeman Benbuin said his uncle, Bullu Adjei and those who were involved in the flogging exercise, did so out of good intentions, to stop an act of indiscipline, which the victim, Stephen Kumson, was championing.

He explained that, the victim was fighting against a directive by the Aowin Traditional Council that sought to imbibe discipline into students and pupils in the traditional area, a directive that sought to fight social vices like prostitution, teenage pregnancies and other social ills.

“It was against this directive that, the victim was leading a charge against, and which move by the victim annoyed my uncle and others, leading them to flog him the way they did in my palace at Enchi, to serve as a deterrent to others,” Beyeeman Kwaw Benbuin explained.

The Aowin Omanhene said even though he was not in the town at the time of the incident, he regrets the action, and said if he were to be around, he would not have allowed that to happen but would have adopted a better approach to discipline the victim.

“But I and my sub-Chiefs will not be discouraged in our fight against the numerous social ills going on in Enchi and its surrounding areas, in spite of the incessant and unwarranted attacks against us, because people see us as having curtailed their illegal sources of income in view of our fight against galamsey activities in the town,” Beyeeman Kwaw Benbuin told journalists.

Nana Benbuin accused some rival factions in the Chieftaincy dispute in the town, who he said, were in cahoots with some security personnel, especially the police, and who are doing all in their power to give him a bad name.

He claimed all that what was going on against him, was because he had formed an anti-galamsey task-force that has been arresting illegal miners, including some Chinese citizens, who have been bribing the police especially.

Fuming with rage, Nana Benbuin queried, “otherwise how could we have over two hundred excavators now on our land and over six hundred Shangfans on our river body without the knowledge of the police.”