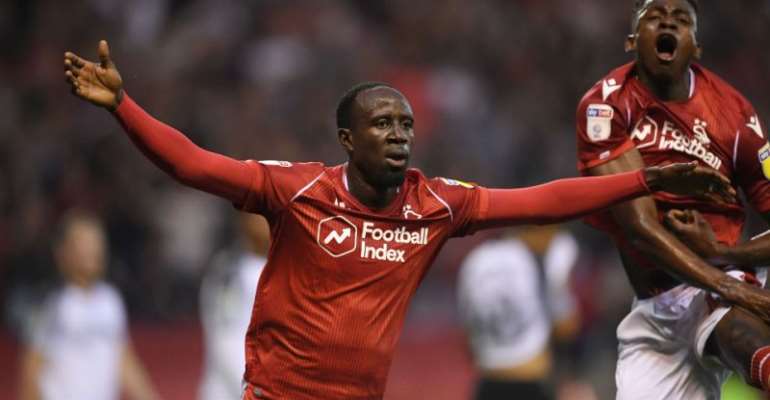 Head Coach for English Championship side Nottingham Forest, Sabri Lamouchi has stressed that Ghanaian international Albert Adomah is a key member of his squad in their quest to gain promotion to the top-flight at the end of the season.

The former Black Stars attacker was one of the standout players last season when Aston Villa secured qualification to play in the English Premier League this season. He has now joined Forest to try and help them achieve the same feat when the 2019/2020 season comes to close.

Since the start of the Championship season, Adomah has hugely impressed and has managed to bag three goals after featuring in six matches. His recent goal came over the weekend when he climbed off the bench to salvage a point for Nottingham Forest in their 1-1 draw with Preston North End.

Commenting on the winger’s recent performance, manager for the Reds Sabri Lamouchi has noted that he is fortunate to be working with such a fine player who can change a game in a split second.

“He is very positive all the time. I am very lucky to work with him; very lucky as a man and as a manager. He has improved a lot. But the quality and the man is fantastic, for me and for the squad”. It was the third time he has scored – against Charlton, Derby and now Preston, the gaffer shared..

He added, “He is very positive. He creates things all the time. When he gets the ball, something can happen.

“He got us the point against Charlton, he changed the game against Derby and on Saturday, he gave us the possibility to get back in the game and try to win.

“He has played 90 minutes for us before, but he can also have an impact from the bench. He has a lot of experience. He is a very important player for me and for the squad.