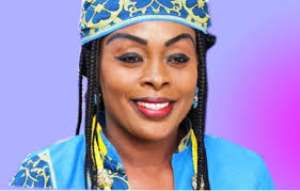 An Accra Circuit Court has given Akosua Agyapong and her lawyer one last chance to conclude the cross-examination of a prosecution witness in the trial in which she has been accused of defrauding a car dealer to the tune of GHC105,000.00.

This was after both Akosua Agyapong and her lawyer failed to show up for the trial which has been before the court since 2017.

The complainant had in the past complained about what he described as “deliberate delays” by the lawyer to stall the case.

The complainant, Jonas Asamoah who is a car dealer drew the attention of the presiding judge to the pace the case was travelling after one of the proceedings.

According to him, it has been more than a year since he mounted the witness boss somewhere in December 2017.

He recounted how the case had to be adjourned a couple of times because Akosua Agyapong’s lawyer presented the court with excuse duties saying she was indisposed.

Mr. Asamoah also told the court how he had to commence a civil suit against Ms. Agyapong and her alleged accomplice, Frank Agyemang Badu due to allegations by her lawyer that he was only interested in collecting his money from the accused persons.

But the presiding judge, Priscilla Dappah Mireku however told the complainant that cross examination “is at large” and that she had been on maternal leave for five months and nobody can be blamed for that.

She therefore urged the complainant to exercise patience.

The judge had set today, for the lawyer to complete his cross examination which has taken more than a year.

Akosua Agyapong and her lawyer were however, not present when the case was called.

The judge was presented with an email correspondence stating that Ms. Agyapong had been invited to be part of a panel.

The judge did not take kindly to it, stating that the lawyer was also not in court and there was nothing before the court explaining why he was absent.

This she said could be considered a gross disrespect for the court.

The judge subsequently adjourned the matter to May 8, 2019 for the lawyer to conclude his cross-examination of the witness.

She warned that if the lawyer fails to show on that day, the court will deem it that he has concluded his cross-examination.

Akosua Agyapong and one Frank Agyemang Badu, a building contractor have been accused of allegedly collecting GHC 105,000 from one Jonas Asamoah under the pretext of providing him with a parcel of land.

They however, as alleged, failed to provide proper documentations to the land and have been avoiding the complainant.

The two are currently before an Accra Circuit Court where they are facing conspiracy to commit crime, and fraudulent transaction of land charges.