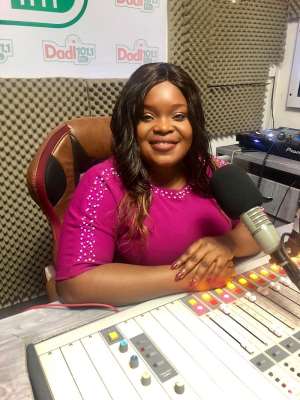 One of Ghana’s outspoken radio personalities, Abena Opokua Ahwenee, host of the Efa Woho morning show on Dadi FM, is gradually making waves with her creative style of presentation.

As one of the pillars behind Dadi FM, Abena Opokua Ahwenee has carved a niche for herself as one of the most outstanding female radio personalities in the country since joining the station an exactly a year today, October 1, 2018 the same day and year stating the morning show.

Though every radio presenter has his/her style of presenting her show, Abena Opokua Ahwenee is no exception and it is something many listeners have observed since she became a morning show presenter on Dadi 101.1 FM located at Nsawam in the Akwapim South Municipality of the Eastern Region.

The host has a crack team of an in-house broadcast journalist for a comprehensive analysis of the day’s newspapers with intermittent interviews regarding pertinent national issues.

Abena Opokua Ahwenee’s style is simple, she presents the issue and let the audience have their say and then bring in the experts to share their views on the matter and then it is discussed.

Efa Woho addresses social, economic and political issues in our communities by giving the platform to callers to share their experiences on selected issues.

A solid production team with an uncompromising backroom staff is what has kept the show going and translating into what the Efa Woho has become just a year hitting the airwaves.

At every pre and post-production meetings, every suggestion is interrogated and every idea given as many angles to give meaning to diversity in reasoning its solid production team members.