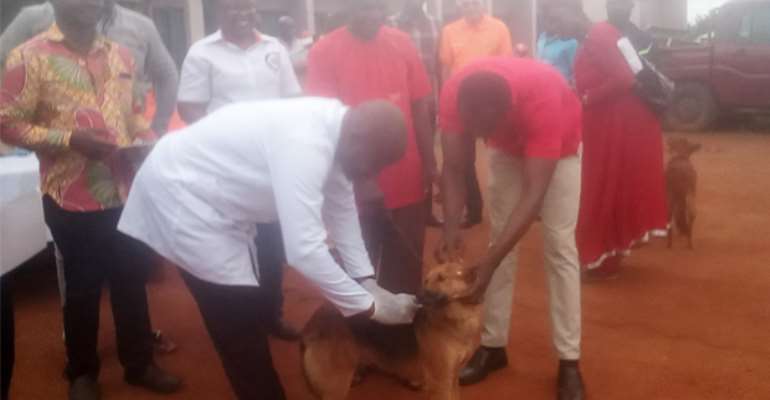 About one thousand two hundred (1,200) dogs in the Sunyani West District of the Bono Region have been vaccinated against rabies in commemoration of World Rabies Day.

According to experts, rabies is a fatal disease of warm blooded animals and is transmissible to human beings through the bite of an infested dog. About 99 per cent of all rabies cases are as a result of bites from infected dogs, killing about 50,000 people annually on the average.

Addressing dogs and cat owners as well as schoolchildren on the need to immunise dogs against the disease, the Chairman of Rabies in West Africa Ghana (an organisation that seeks to eliminate rabies by 2030), Richard Suu-Ire, advised dog owners to take good care of their pets by vaccinating them for five consecutive years to help reduce about 70 per cent of death of human beings as a result of dog bites.

Dr. Suu-Ire said about 59,000 people died annually from the disease as a result of dog bites. He described the disease as dangerous hence the need to educate the public to help eradicate it by 2030.

He said children between the ages of one and 15 years were at risk of rabies because “they allow the dogs to scratch them with their claws, bite or lick their wounds”.

The Country Director of Food and Agriculture Organisation (FAO), Dr. Garba Naina Ahmed, said because the disease is dangerous and killing many people in the agric-sector, the FAO was collaborating with sister organisations to eliminate the disease by 2030 hence the theme: “Educate to Eliminate”, which is aimed at highlighting the dangers associated with the disease.