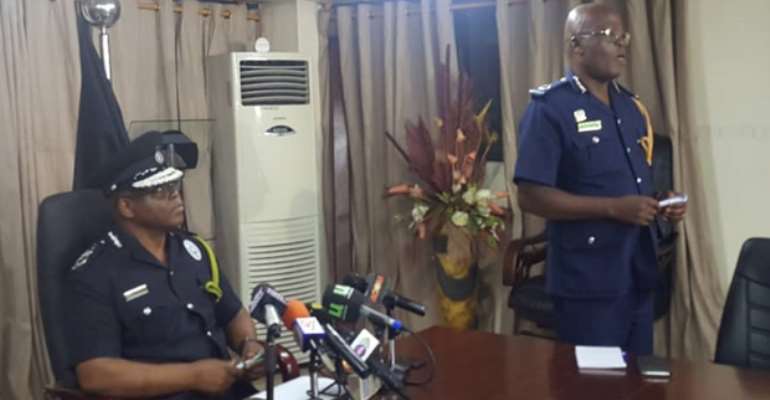 The Acting Inspector General of Police, James Oppong Boanuah, has given various reasons why the police failed to obtain and act on accurate intelligence, to rescue the four Takoradi girls.

According to him, the suspects gave incoherent reports which led the police on a wild goose chase with no results in the missing Takoradi girls’ case.

The victims who went missing on different occasions in the Takoradi Metropolis are Abeka, Pricilla Bentum, Ruth Love Quayson and Priscilla Mantebea Kurankye.

Briefing the media in Accra yesterday on the results of the DNA tests that proved that the remains were that of the girls kidnapped from Takoradi, Ag IGP Boanuah said suspect Samuel Uduatuk Wills admitted in an earlier interrogation that he together with suspects John Orji and John Chika kidnapped the young girls and sent them by road to a location in Nigeria known as ‘Baby Factory’ in Anambra State in Nigeria.

““The evaluation of this confession and other intelligence reports from Nigeria on the location and modus operandi of this ‘baby factory’ in Nigeria culminated in an assessments by the investigating team at this stage that they had a fair idea of the location of the girls and that it would be possible to bring them home,” he said.

He said the Ghanaian police therefore mounted surveillance at the location the suspect mentioned as places where the girls were sent and directed investigation teams to, with the hope of tracing and rescuing the girls.

The IGP however noted that when the second suspect, John Orji, was arrested and questioned he admitted to knowing Samuel but denied knowledge of any kidnapping.

“The two suspects were put together for questioning and while Samuel insisted that John knew where the girls were, John on the other hand maintained his denial of any involvement in the kidnapping… Efforts to locate the girls in Nigeria also yielded no results. The Nigerian leads were assessed to have grown cold and unreliable,” he said.

Mr Oppong Boanuah continued that on August 2, 2019 , the investigating team decided to re- examine all available facts associated with the case and went to further search the residence of Samuel Uduatuk Wills’ residence in Takoradi.

“A detailed search of a previously unexamined septic tank resulted in the discovery of materials suspected to be human hair.

A subsequent draining of fluids from the tank revealed three human heads at the bottom of the tank.”

He noted that in addition, bones suspected to be human remains were retrieved from the septic tank together with two sets of earrings and fingernails with artificial teeth.

The acting IGP revealed that suspect Samuel was questioned about the discoveries but he provided no coherent responses and on August 5, 2019 a joint team of crime scene investigators and forensic lab experts from the police headquarters visited the scene with suspect Samuel for further examination.

“With the lessons from the second August discoveres, the Ghana National Fire Service was engaged to empty the well and this led to the discovery of a human skull which was fresher than the three found in the septic tanks.

Additionally, parts of a dress found earlier in the other house was also discovered at this location but suspect again provided no coherent answers to questioning at the scene and this dress found was identified by Manteabea’s father as belonging to his 15 year old daughter.

Mr Oppong Boanuah added that the discoveries were subjected to a DNA test, the results of which have now been tested positive and communicated to the families.